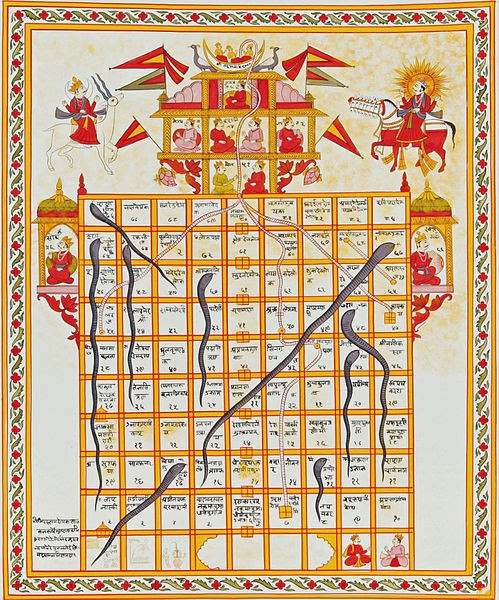 Widely known as Snakes & Ladders is no doubt one of the fun games to play for passing time with friends and family. But the original game was quite different than the one we know.

Originally invented in India, the board game was called “Mokshapat” or “Moksha Patamu”. Some historians claim the game was played as early as the 2nd century BC, but others are of the opinion that Swami Gyandev invented the game in the 13th century AD. The purpose of the game was to educate children about morals and values. Each ladder represented good deed and each snake represented a sin. The original game had more numbers of snakes referring that in life, we are more likely to stumble upon the wrong path.

In the actual game, the squares of  virtue were:

And finally, the last square 100 represented Moksha (salvation within oneself). Each ladder leads us closer to salvation, whereas on encountering snakes, the evil we do results in rebirth as a lower life form.

Did you know about this original approach of Snakes and Ladders? Neither did I. It was a good means of educating children about right and wrong.

After India was colonized by the British, the game was introduced as Snakes & Ladders where the number of snakes and ladders are equal. The symbolism was also removed from the square, making it just another ordinary board game.