Movie Review: Catch Me If You Can 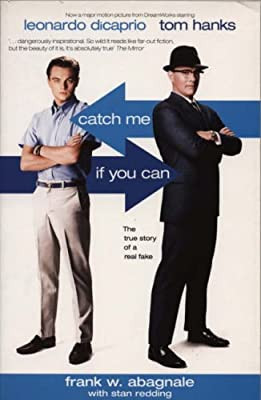 “Two little mice fell in a bucket of cream. The first mouse quickly gave up and drowned. The second mouse... wouldn't quit. He struggled so hard that eventually he churned that cream into butter and crawled out.”

“Gentlemen, as of this moment, I am that second mouse.”

“Catch Me If You Can” is an American Crime Biographical movie. It is a movie based off of the story of Frank William Abagnale Jr, who was known as a con man and check forger back when he was 15 to 21 years old. Frank is played by Leonardo DiCaprio.

Talking about the movie itself, the movie was enjoyable. We see how a joyful family like Frank’s broke up and how he started forging cheques to earning millions and how Frank masterfully impersonates different people of different professional backgrounds—like when he impersonated a substitute teacher so wonderfully well in one scene that I wondered how he was able to pull it off. Leonardo DiCaprio’s acting was flawless! The cinematography was good and the story definitely kept me engaged. It got me amazed and wondering how Frank was able to pull all of this in real life, when he was only 19-years-old.

Frank lives with his family and after having trouble with the IRS they are forced to move out of the house. Meanwhile, his mother has an affair with one of his dad’s friends. Soon after, the family files for a divorce and Frank has to choose between staying with his father or mother.

He takes off running and goes to a city where he lives with the little money he has. After running out of money, he starts forging checks and tries to get money from the banks but is denied.

He then realizes to get money out of the bank, he needs to be someone who can be trusted. So, he acts as a Pan Am Co-pilot. Pan Am was a well-respected American Airline. He gets his checks cleared one after the other and also withdraws Payrolls from Pan Am, where he does not even work. Eventually, he started making millions.

Meanwhile, a FBI agent called Carl Hanratty, played by Tom Hanks, starts tracking Frank down. Carl even got to Frank and almost got Frank arrested but Frank masterfully impersonates a Secret Service agent and gets away.

Frank’s cons now include being a doctor. As Dr. Frank Conners, he falls in love with a Brenda, a nurse he’s working with. Meanwhile, he also asks for Brenda’s hand with his father who is an attorney and tries for the Louisiana State Bar exam for being an attorney which he succeeds. On the day of Frank’s and Brenda’s wedding, Carl shows up with his team and Frank gets away minutes before Carl gets him.

Frank leaves the US and goes to different countries before Carl finally catches him in France, where the French Police jail Frank for 2 years until he is extradited to the US. He is locked up in a Maximum Security Prison where he has to serve 12 years. During a visit by Carl, when Carl shows a cheque of some guy who is scamming banks much like Frank did, Frank casually mentions things like how the cheque was made, who might have been the forger, what kind of paper was used, etc. The FBI gets his help and gets him out of prison. Frank works for the FBI in the Cheque Fraud Division until the custody is over. And in the ending, we see Frank having been a valuable member to the FBI in solving cheque fraud cases. He even created cheques that were of a set security standard which were used by big businesses and Fortune 500 companies. He lived with his wife and 3 children.

The development of the story never felt abrupt or out of place. The scenes were well transitioned. The acting was excellent and it kept me engaged throughout the movie.

In short, it is an enjoyable movie which you can watch. It does not have any underlying motivational content. It simply shows a journey of a Cheque Forger and a Con man who got away from the FBI two times and how he got caught and how his life played out. Do give it a watch in your spare time!