Schizophrenia: Bizarre actions of the mind

Schizophrenia was first identified more than a century ago, yet we haven’t been able to identify its cause as it remains one of the most stigmatized illnesses today.
Schizophrenia is formed from the words Schizo meaning split and Phernai that means mind. It directly translates to the splitting of the mind which doesn’t mean the person with this condition has split personalities. Rather Schizophrenia is described as the condition of a fragmented pattern of thinking that means a patient with this illness loses the ability to distinguish between reality and exaggerated ideas. Schizophrenia is designated as a syndrome that means there are plenty of symptoms associated with it where schizophrenic patients experience different symptoms.

Symptoms:
The symptoms can be broadly categorized into three parts: Positive, Negative, and Cognitive symptoms. As we know other illnesses in the human body are extreme versions of a normal physiological process of the body. For example, a heartbeat is a normal process to pump blood and Tachycardia is a condition where the heart beats at an accelerated state. Similarly, fever is the extreme version of the normal human temperature to fight off infections. In Schizophrenia patients have a positive symptom in the sense that they experience a phenomenon that doesn’t happen in the human body normally. These include psychotic symptoms such as delusions, hallucinations, disorganized behavior speech, and catatonic behavior.
Delusions and hallucinations include the feeling where the patient is being controlled or a direct telekinetic signal is giving the patient suggestions or exposing secrets. The patients might go through movements or speech patterns that are bizarre and serve no purpose in general. Negative symptoms of Schizophrenia include the lack of emotions and interest in substances that formerly piqued their curiosity. For example, A patient with Schizophrenia when induced to an unexpected event such as a chicken suddenly appearing in the room does not react to the event. Some patients also may display a lack of motivation to complete goals and stay isolated from family and friends.
Cognitive symptoms are rather subtle and difficult to notice unless specific tests are performed. These include difficulties in memorizing, learning, and understanding. People with schizophrenia tend to have a phase cycle: Prodromal, Active, and Residual phases. 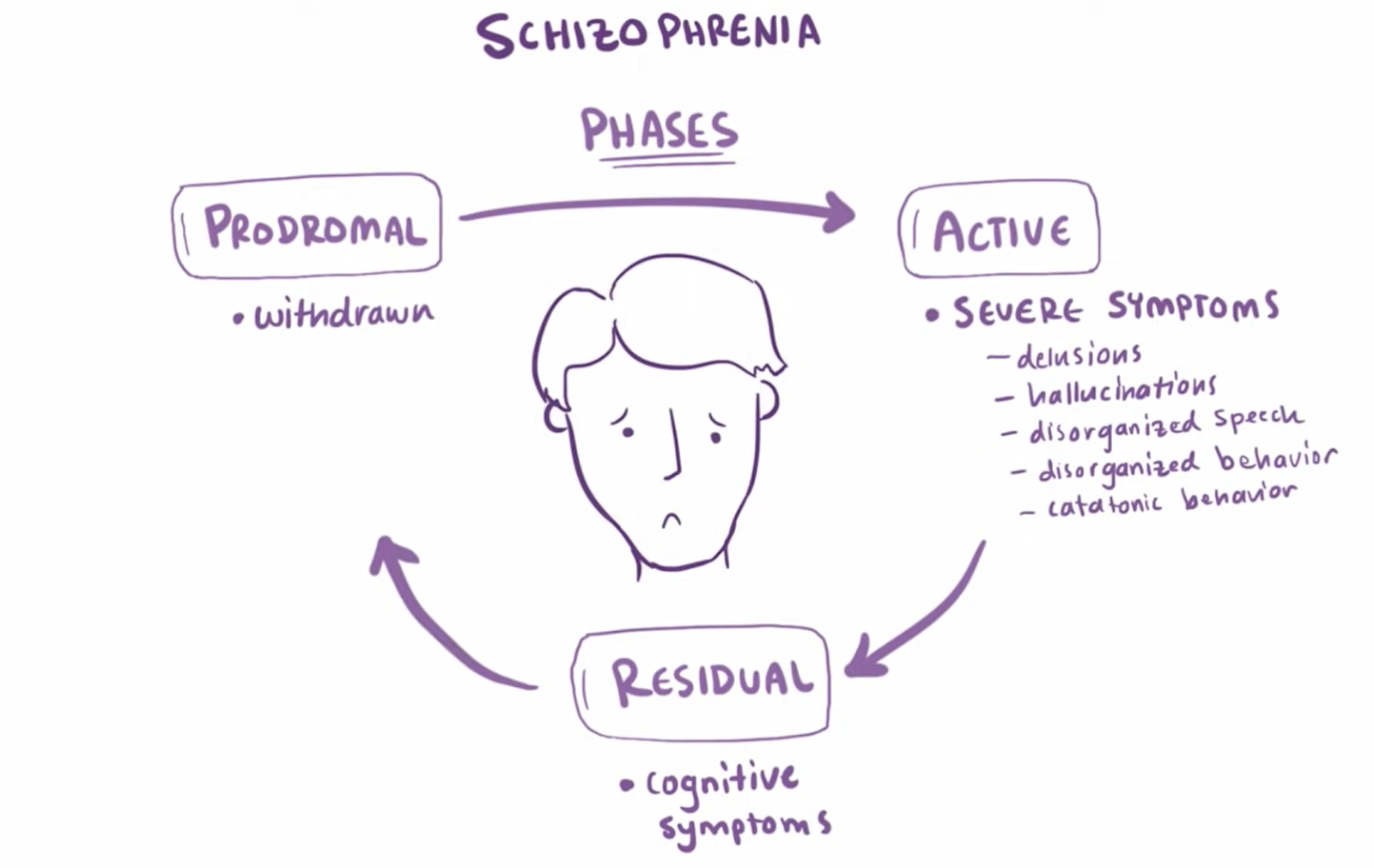 The prodromal phase is similar to other mental disorders such as Depression and Anxiety disorders. The active phase showcases the positive symptoms while the residual phase displays cognitive symptoms.

Diagnosis:
For an official diagnosis of Schizophrenia, the following is listed below:
At least two of the symptoms must be seen in the patient as listed below where the patient must have one of the positive symptoms for six months with a compulsory active period. The conditions must not fall under substance abuse.

Causes:
The causes of Schizophrenia are unknown as the symptoms are seen only in humans meaning hard to notice in other organisms. The majority of antipsychotic medication which improve the symptoms generally block the dopamine D-2 receptors in the brain reducing it. This suggests increased levels of dopamine as a possible cause of Schizophrenia, but these medicines aren’t universally or completely effective in fueling the peculiarity in its cause. Twin studies also suggest a genetic basis for Schizophrenia even though there aren’t specific genes conclusively linked to it. Environment factors such as prenatal infections and specific autoimmune disorders such as celiac disease have been linked with Schizophrenia. It seems to happen slightly more in men with an onset of mid-twenties and an onset of late twenties for women with less severe clinical signs. Some studies of this phenomenon suggest the estrogen regulation of dopamine in females as there are no differences in race.

Treatment:
Schizophrenia treatment is quite tricky as it requires a combination of antipsychotics, clinical professionals, therapy, and psychopharmacology. Antipsychotics are quite effective but come with their problems such as costs and side effects which include tolerance, dependence, and withdrawal.

In the end, we should put an effort to reduce the taboo against Schizophrenia and help to identify and support such personnel.