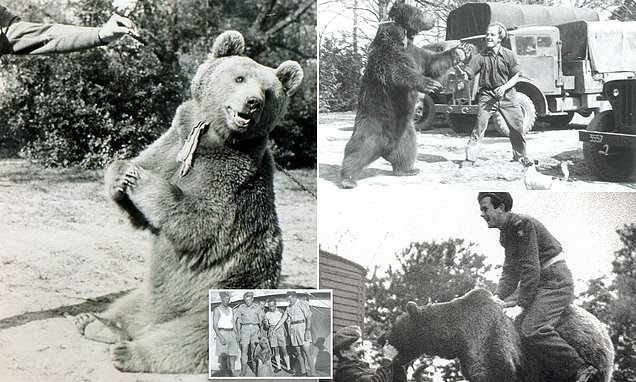 Corporal Wojtek is not your ordinary soldier. In April of 1942 a group of polish POWs newly released from a Siberian gulag were traveling by train throughout the Iranian mountains, they were headed to join the British allies in the Middle East. There they met a young Kurdish shepherd who carried a large sack which was moving. There they met a little brown Syberian bear cub, the young boy had found him abandoned and thought the mother had been hunted down by the hunters. The soldiers traded the bear from the young boy with a chocolate bar, a Swiss Army knife, a can of corn beef and some other canned goods. Lieutenant Tarna Viet Ski kept the bear for a while and later donated him to the soldiers of the 22nd Artillery Supply Company. The soldiers named him Wojtek meaning the happy warrior. They fed him milk from the bottle of vodka, as he grew he fed fruit to marmalade honey syrup and beer. He quickly adapted to the camp life and blended with the soldiers. The 6ft tall and 500 pounds wojtek liked to wrestle with the soldiers, drank beer and smoked lit cigars. The bear befriended other animals in the camp including a Dalmatian belonging to a British liaison officer. The pair would chase and play with each other. The soldiers trained him to dangle men upside down, which created fear amongst men that they were going to be eaten alive, it usually worked to spot intruders and undercover enemies. Wojtek was a notorious bear, once on christmas eve after a traditional polish feast, drunken wojtek broke into the camp’s store room and spilled cooking oil and flour while looking for jam and other sweets. He also stole some women’s undergarments from an allied forces camp in Iraq. Despite his mischievous acts he was loved and adored by everyone. Wojtek had become the unofficial mascot of 22nd Artillery Supply Company.

Wojtek was also very fond of coffee and taking showers. Due to the scarcity of water in the middle east sometimes the shower loving bear even caused shortage of water supply in the camp. Hence the soldiers started to keep the bathhouse door locked. One day in June of 1943, Wojtek sighted the bathhouse door unlocked, excited Wojtek while entering inside the bathhouse came face to face with an Arab spy on a reconnaissance mission who had hidden in the showers. Growls and screams of Wojtek alerted the camp guards and the intruder was soon taken into custody. The petrified spy after having encountered Wojtek babbled out various secrets including the news of an impending raid. And as a reward Wojtek was allowed to take an extra long shower and receive sweetmeat beers.

In 1943 the soldiers had to board a ship to Europe but sadly the ship had a rule against allowing mascots and pet animals on board. The 22nd Company enlisted Wojtek in the army and was given the rank of Private and had his own pay book and serial number during the brutal Battle of Monte Cassino. Wojtek soon started copying the soldiers who carried 100-pound crates of 25 pound artillery shells from the supply trucks to the front line standing in his hind legs. Whenever they were short of ammunition Wojtek would supply it to the army. After the victory he was promoted to the rank of Corporal. Eventually The 22nd company adopted a depiction of a bear carrying an artillery shell as their official emblem. After WWII ended in 1945, The 22nd company were stationed at winifred airfield on some wood farm in Scotland where once again the magical happy soldier was cherished by the locals and children.

The polish army had to demobilize in 1947 and many soldiers had to return home. The goodbye was emotional and heart wrenching to both the soldiers and Wojtek. From a psychological view Wojtek had been an escape from homesickness to the soldiers. Wojtek was resettled at the Edinburgh Zoo. He was introduced to other bears but he didn’t get along. Wojtek thought of himself as a human and he was kept separately. Sometimes his former comrades would come to visit him, have a wrestle and drink bottles of beer. Wojtek would perk up whenever he heard Polish being spoken. He lived the rest of his life in the zoo and passed away in 1963 at the age of 21. In the memory of Wojtek, the bundle of joy, many sculptures and statues are built in the Sikorski Museum- London, Weelsby Woods- Grimsby, Jordan Park krakow- Poland and Princes Street Gardens- Edinburgh.

Wojciech Narębski, a Polish soldier who spent three years alongside Wojtek during the war told the BBC “It was very pleasant for me to think about him, I felt like he was my older brother."