The Convergence of Science and Spirituality 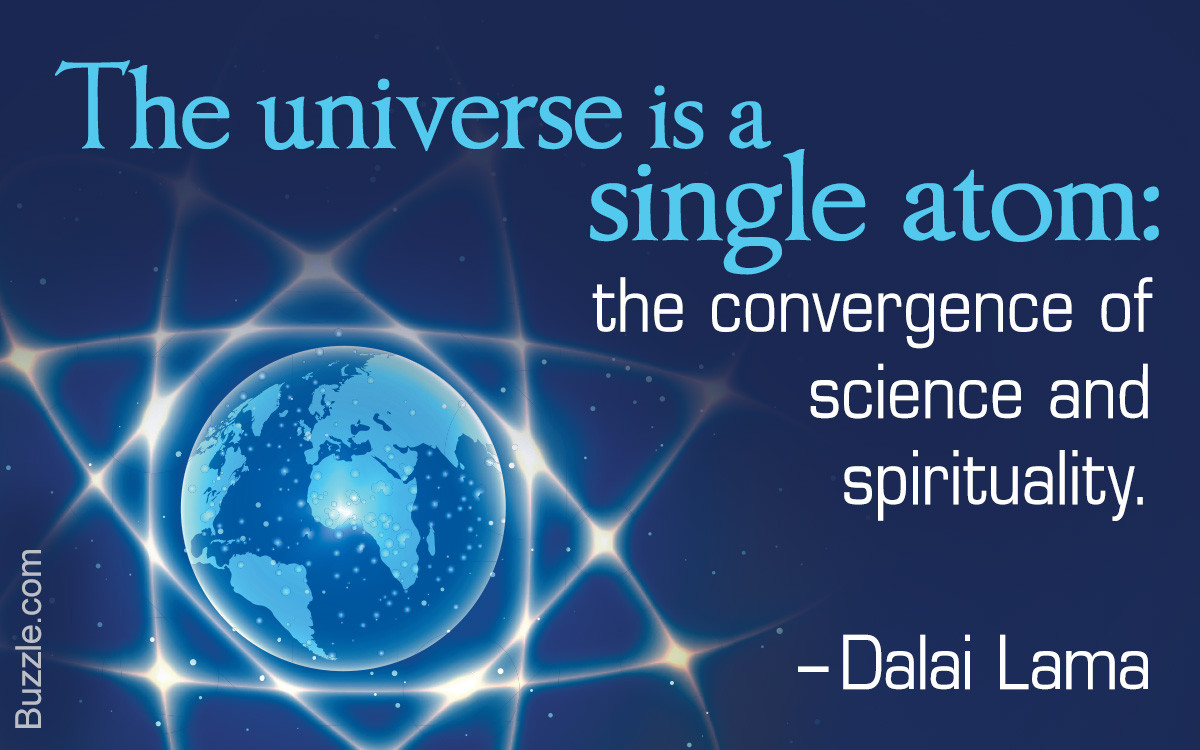 “The Universe in a Single Atom” written by Tenzin Gyatso, His Holiness the 14th Dalai Lama, discusses the similarities and differences in scientific and Buddhist perspective about reality, universe and life. Both Buddhism and Science, aims to alleviate the suffering from the world and they are looking for answers to the ultimate questions and Dalai Lama believes this objective can be achieved only if science and spirituality work hand-in-hand.

"I believe that spirituality and science are different but complementary investigative approaches with the same greater goal, of seeking the truth. In this, there is much each may learn from the other, and together they may contribute to expanding the horizon of human knowledge and wisdom. Moreover, through a dialogue between the two disciplines, I hope both science and spirituality may develop to be of better service to the needs and well-being of humanity."

Dalai Lama developed interest in science in early childhood. One evening, while looking at the “Rabbit on the Moon”, a Tibetan folklore, through a brass telescope, he discovered that it consisted of shadow cast by craters. He instantly thought the moon must be lighted by the sun, just like the earth. He was delighted by this discovery. This is one of such humble beginnings in science for Dalai Lama. Later on, he got fascinated with mechanics while working on clocks and watches and car engines.

Although, Dalai Lama never had a formal training in science, he learned a lot about science through reading news coverage and meeting with scientists during his travels. Moreover, his “Mind and Life” conferences have brought many physicists, cosmologists, biologists and psychologists to discuss on the subjects of science and spirituality.

Buddhism and science converge when it comes to the nature of reality. In quantum physics, according to De-Broglie Theory of Duality, there is uncertainty at the subatomic level where matter behaves as both wave and particle. Similarly, Buddhist theories believe in changing and transitory nature of matter. What we see and feel may seem as firm and solid but in reality they aren’t so. They go into transition all the time. So, there is no certainty that it will last forever, and developing an attachment towards it will hurt us in the future. This is one of the underlying principles of suffering in Buddhist theory.

One of the biggest conundrum for the humans has been the origin of the universe and many theories have tried to give a justifying explanation; from the existence of a superior being, a creator, who designed the universe to the universe being a hologram projected in a sphere. Among them, one of the most widely acknowledged theory is “The Big Bang Theory”. This theory explains that the universe began from a single point with a big explosion known as the Big Bang and has been expanding since then. But, what about the time before the “Big Bang”? What was there before the explosion?

In Buddhism, the theory of cause and causality prevails and Buddhism doesn’t accepts an effect without a cause. Buddhists propose that the universe is infinite where there is no such thing as beginning or end of the universe. Instead, Buddhist theories propose that infinite universes were created and collapsed and this cycle keeps on repeating till eternity. However, Buddhists aren’t holding firm on this notion of the universe and is always open towards plausible new theories and Dalai Lama wishes science to venture beyond the ‘Big Bang’.

Dalai Lama believes that one of the striking contrast between science and Buddhism is that science investigates into the nature with third person perspective whereas Buddhism looks into it with first person perspective. When investigating the truth, science ignores the subjective view of the person. It leaves behind one of the most important variables i.e. the mind. While in Buddhism, meditation is one of the key technique to investigate the truth and mind is an important factor. Buddhists believe in matter, mind and mental states.

In the spiritual world, compassion is a major focus. Buddhism’s main aim is to alleviate negative feelings of hate, anger, jealousy etc. But, Dalai Lama, is shocked that modern psychology emphasizes on these negative emotions instead of investigating the altruistic character in humans. Moreover, another disturbing fact is that scientists involved in human genetics are more concerned with intellectual enhancement, physical beauty and athletic achievement. Dalai Lama believes that the true worth of a person is in his capacity for compassion.

"My plea is that we bring our spirituality, the full richness and simple wholesomeness of our basic human values, to bear upon the course of science and the direction of technology in human society. In essence, science and spirituality, though differing in their approaches, share the same end, which is the betterment of humanity."