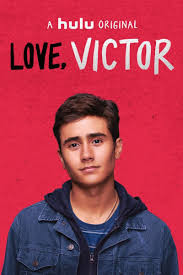 Love Victor is a rom-com series based on the main character named Victor who struggles with his sexual orientation. He moved to a new city where everything is new for him. Victor is afraid to come out to his family as gay, as he feared his parents wouldn’t accept him as he has a very strict family. To not hurt his parent’s sentiments, he decides not to tell anyone about his sexual identity and acts like a normal guy and starts dating a popular girl in his college and everyone seems to talk about him which he seems to like and enjoy the stardom.

Here, the main character takes advice as well as shares all of his feelings to a guy named Simon, who has had the same story as him. Simon shared all his stories of coming out and encouraged him to do whatever that is best for him. Victor then goes to New-York city to meet Simon and to see the outside world where being gay is not a big deal. He’s amazed to see how people are so accepting to LGBTQ communities and it inspires him to come out as gay.

Besides, from the main character who struggles with his sexual orientation, the series also talks about the importance of self-love and being unique in each own way. Every character has their own flaws which they seem to accept and flourish by the end of the season. Overall, the series is a pleasant watch with its interesting story plot.