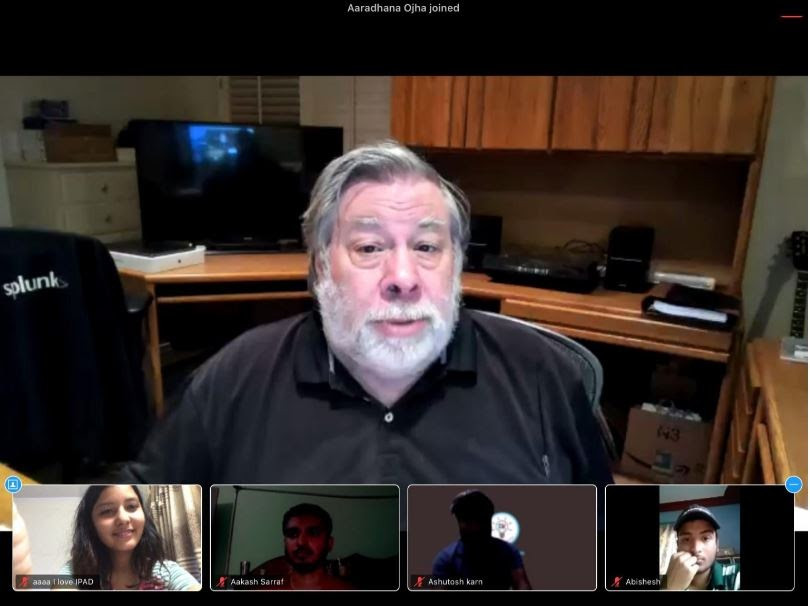 Steve Wozniak during the event

QuantumHack, in collaboration with NxtGen, had organized the first-ever international digital hackathon on 28th-29th August in Nepal. In this event, a large group of innovators collaborated with the goal to solve real-world problems in a relatively short time. Also, one of the biggest achievements of the event was the special guest who was none-other than Steve Wozniak, Co-Founder of Apple.

As I was researching about the event, I was more curious about it. So I decided to interview one of the organizers of the event, Mr.Biplab Karki.

During the Virtual Interview Session with our guest

Quantum hack has been all over social media for days. What really is Quantum Hack?

Quantum hack is the largest digital hackathon that happened for the first time in the history of Nepal. Due to COVID, taking everything digitally has become a trend. So, we also wanted to do such events digitally which had already been done around the world but never had been done in Nepal.
We decided to do this event around 2 and a half months earlier with the motive of doing something impactful and also something that has never been done in our country. We thought we would certainly do something impactful but never had thought that this would be grand as it has become now. Initially, we had just planned to organize a simple hackathon but gradually many events such as varieties of workshops and different programs were added. So yes, this quantum hack is a digital technology fair that has never been done at this level before.

It is a hard time due to pandemic and in this time of despair how did you come up with an idea of doing something like this? Was this in your list earlier?

We certainly had thought of doing hackathons and such events but obviously not digitally. Even if we had organized such an event, there was a high chance that the event wouldn’t have been this successful as it is now. Since it was done virtually, people from all around the world could attend at less price- they could be part of it.

Since it was the virtual, also the biggest international online hackathon in Nepal. What were the challenges of organizing such event?

Obviously, we were really afraid that people would not be comfortable with this as the digital trend had just started due to the pandemic. So I would say, this was the biggest challenge. While doing and preparing for the event there used to be internet and power off issues but somehow we managed.
The second challenge I would say is the sponsorship. Since COVID, many companies have been bearing economic losses. It was a big problem at first, however, we got through it.
Other than that, being an IT background, we technically coped up easily.

There were six main themes of the event? Would you explain why particularly they were the themes?

The 6 themes were decided to keep COVID at the center. The themes were:

Disaster Management and Preparedness: Ready For The Next Disaster

As the recent pandemic crisis has bestowed our unpreparedness. We need to improve our weaknesses to be combat-ready to face any possible future disaster, which was the reason it was our theme.

Fintech: Modern Financial Services For Everyone

As the business world is a very competitive world and modern financial services are essential to every individual and business. In this context, Fintech has been able to provide such services to people who have only very limited access. Keeping this in mind, this event also has ‘Fintech’ as one of the themes so that some innovation in this field could be explored.

As the recent pandemic crisis has shown that we must improve upon our traditional methods to ensure that educational services are not disrupted by such crises. This theme was  added to make us well prepared in terms of continuous learning and teaching when the next disaster occurs

This pandemic crisis has disturbed some of the most advanced health services in the world and exposed the weaknesses in healthcare delivery practices. So, there is huge room for improvement in healthcare. This is why ‘Health’ was one of the most exciting themes for ‘QuantumHack’.

As, ‘Entertainment’ is an attractive segment for every hackathon. Also, the entertainment industry is deliberately changing with the rise of immersive technologies.

So, this is the segment, which is not confined to a specific problem domain. Here everyone will have a chance to showcase their creativity according to their choice.

Could you describe the event in brief?

So basically it was a two-day event. Apart from the basic opening and closing, we had mentorship sessions, different workshops related to tech as well as non-tech, game sessions, fun events. Besides we had many performances of the media personalities. So two days was all of it.

Another biggest talk was Steve Wozniak, the legend, the co-founder of apple was the special guest of the event. How did that happen? Tell us about it.

Yesss (laughs)! Honestly, we had no idea we would have a guest like him. We had approached many media celebrities but due to their schedules, they couldn’t attend. We had no guests, so we thought nevermind, the event will be great as we also have big tech enthusiasts already.
But then him being our guest, the event became grand. We didn’t even know he would come or not. We had sent many emails to his team but maybe because of the proposals and main being not so catchy we had no response. But one night, 4 days before the event I emailed him thinking to give a last try. Ironically, I got a reply. I jumped out in happiness.
We just had a 3 to 4 conversation about the event. The news had already taken the internet but we were scared if he would show up or not. Surprisingly, he was there before the time. He was really punctual and down to earth person. He inspired everyone with his talk and his attitude. I would now certainly say he was the very right person for the event.