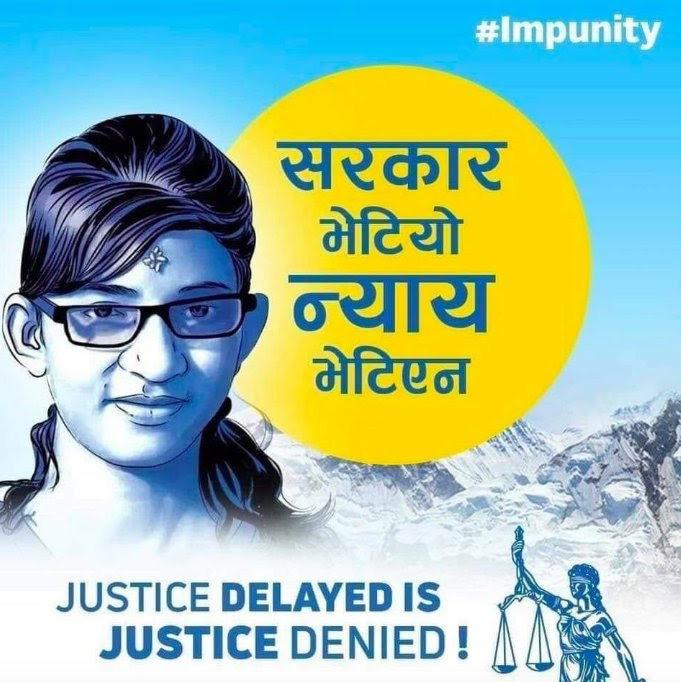 Let’s brief back to the investigation carried out during these 752 days. Nirmala left her home inorder to complete her homework in her friend’s home Roshani Bam but didn’t return. Nirmala’s worried parents seeked help from the police on the very night of her disappearance but their frantic cries were not heard as Inspector Jagadish Prasad Bhatta chose to drink beer instead of carrying out a search investigation. Knowingly-unknowingly the police department caused various negligence. As soon as Pant’s body was found in the sugarcane field not more than a kilometer away from her house, a police officer was found washing Pant’s trousers and covering the bare  body, a recorded video of the crime scene vividly showed the event. The act seemed extremely unprofessional and somehow doubtful. Evidence was not studied carefully, police dogs were not employed which showed the poor quality and ignorance for the police force. Scenes of Crime Officers (SOCO), who are specially trained to collect evidence from the crime scene, also failed to discharge their duties well and weren’t directed properly by senior officers. The vaginal swab collection was also done after 2 days, which shows that the case was not being handled seriously.

The protest had already begun in Kanchanpur to find and punish the culprit. 41 year old Dilip Sing Bista was accused of being guilty by the investigating officers, they claimed that Dilip confessed multiple times during the interrogation. But the locals didn’t accept the claim made towards Dilip who was mentally challenged and accused the police for protecting the culprit by framing an innocent one. However despite the claims made by investigation officers Diip’s DNA didn’t match with the collected vaginal swab.

A report presented by the National Human Rights Commission indicated there was a slip-up in DNA collection. At present there are 3 ways of testing DNA sample- Autosomal STR (It is used mainly to distinguish two individuals as “hypervariable” regions of DNA tend to be very different between different people), Y-STR( It is very essential to provide investigative leads for finding unknown male perpetrators since it works only in Y chromosome but it also inlines generation of male heritage making it difficult to pin-point at a particular male.)  and Mitochondrial sequencing (this test is efficient when the DNA sample is highly damaged). In Pant’s case only Y-STR testing was done and as a result identification of male from the male fraction couldn’t be done. The extraction of the DNA sample wasn’t sufficient and also could have been degraded.

Furthermore, The Central Investigation Bureau arrested Nirmala’s neighbour Pradip Rawal and his friend Bishal Chaudary on december, under interrogation by Inspector General of Police Sarbendra Khanal, the duo confessed of committing the crime but in spite of that neither Rawal nor Chaudhary’s DNA matched the sample collected from the vaginal swab. After being released the duo claimed that the police had brutally tortured them, but the police denied.
Beyond this, no trail has been found and followed by the Police Department. The case has been left helplessly. During the protest in Kanchanpur a 17 year old teenager Sunny Khuna was shot dead and many were injured in the open fire. It led to the escalation of protests across the country, demanding the arrest of perpetrators.

The demand and voice saying justice for Nirmala had died in the middle but now the roaring protest is back. People have been using #justiceforNirmala all over Prime Minister Khadga Prashad Oli’s facebook wall and twitter. After the wildfire spread of “Binod” in the social media, citizens realized the proper utilization of trend, the rape and murder case of 13 year old Nirmala which is still in dark should be brough into light and be on surface rather then some incoherent trend. Trends come and go but #justiceforNirmala should not be a trend that will be silenced in a week or so. The protest shouldn’t have died in the first place, the pressure should have been given consistently. In a country where the massacre of Monarchy hasn’t been brought to light even after 19 years, can we really expect justice? How can we be proud and say we belong to the nation of lord Buddha where people believe in peace, when even after 2 years Nirmala’s soul knows no peace. Is the government so helpless that it can’t give justice to its own citizens? Or is the government deliberately ignoring it? People have set a target of reaching 1M comment in the Prime Minister’s profile picture, making the government hear the roar of the citizens who haven’t forgotten Nirmala like they have. We shouldn’t stop until justice is served, until the culprit is imprisoned or else not only will the government have failed Nirmala but also us.