My opinion on Nepal Police decision to deduct the salary 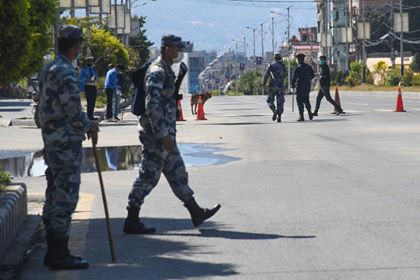 Nepal Police has decided to deduct some portion of the salary of all officials above the rank of assistant sub-inspector in order to contribute to the government’s COVID-19 fund.  According to the decision, all ranks from assistant Sub-Inspector to the Inspector General will contribute three to seven days’ salary in the fund.  The decision was not liked by many people.  Some people even misunderstood that this decision was taken by the government but in reality, it was decided by the Police headquarter.

Is it really fair to deduct their salary for the COVID-19 fund?

The country has been under lockdown for weeks. The security forces are mobilized in the streets and roads to ensure that the citizens stay inside their homes and to maintain law and order, without wearing proper safety equipment. The decision of lockdown is not pleasant for anyone but it is very essential. To work continuously in high pressure and with high risk is very difficult. But still, they are dedicated and performing their responsibilities in an excellent manner.

It is not a lesser-known fact that the pay scale of government employee including the security forces is comparatively very less. They are struggling to manage their basic needs with their low pay scale. We know that COVID-19 Virus doesn’t attack people on the basis of rich-poor, high caste-low caste, VIPs- normal people, etc. There is an equal risk for all including for these security forces on the ground,  yet they are committed to serving the people and nation.

We know that in the present situation, after medical workers, these security forces have been working day and night without caring about themselves and their families. Their sacrifice and determination can never be unseen.

Do such decisions show that it has become a mandatory practice to deduct the pay scale in the time of the national crisis?  I am not sure if it is the continuation of past practices or a new decision?

Instead of deduction, if they are paid with extra allowances then they might be more motivated in this situation. Yes, money isn’t always everything and what they are doing is their duty but we can’t forget that they have their duty towards their family also. There should be some privileges for risking their lives in this critical situation, shouldn’t they?