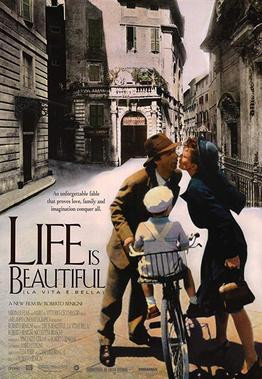 After you’ve finished watching “Life is beautiful”, the frequent question you’ll be asked is “Did you cry at the end?”

Life Is Beautiful  is a 1997 Italian comedy-drama film directed by and starring Roberto Benigni, who co-wrote the film with Vincenzo Cerami. Starring Roberto Benigni as Guido Orefice, Nicoletta Braschi as Dora Orefice and Giorgio Cantarini as Giosuè Orefice, Life is beautiful is a comedy about holocaust. It is very difficult to make a comedy-drama in a WWII holocaust nazi concentration camp scenario, there were numerous ways for the movie to have gone down but it came out to be one of the most loved holocaust movies among the viewers. Life is Beautiful won three Academy awards including Best Actor and Best Foreign Language Film.

A comedy drama about one of the worst history of humankind, really? You must be wondering. How did that even work out? Well, the charm and comedy act portrayed by Roberto Benigni made it work beautifully. Guido Orefice is a Jewish Italian bookshop owner, he is kind, humble and comical. He falls in love with Dora, a teacher who is soon to be married to a rich and arrogant man. The first half of the movie is your typical love story of a man trying to pursue a woman with his charm and comedy acts. They get married and have a beautiful boy. Things hit differently in the second half of the movie, Guido being jewish and his son being partial jewish are taken to the nazi concentration camp. Even though Dora was Cathylic, she insists and tricks the officer to get on the train going to the concentration camp to be close with her husband and son. In such time, maybe most of the parents would ask their children to be strong and man up to live according to the society but here Guido tries to save his son’s innocence by making him believe that they were playing a game where his son is the hero. When anything terrible occurs he just makes up additional roles and stories to make it fun for his son. One of the scenes I liked was when a Nazi guard asks if anyone knew German where Guido voluntarily agrees even though he knows little to no German and gives hilarious translation to stun his son in awe and laughter. Honestly, the love showcased by the father to make his son feel safe is heartwarming and heartbreaking at the same time.

The entire movie revolves around Guido’s comical act, in the first half to get the girl of his dream and in the second half to protect his son. Life is Beautiful, is a hidden gem of cinema which needs to be watched by everyone once in their lifetime. When you’re surrounded by friends or families and begin discussing movies, “Life is Beautiful” will surely be recommended and if you’ve watched it, it will be followed by the question “Did you cry at the end?”.