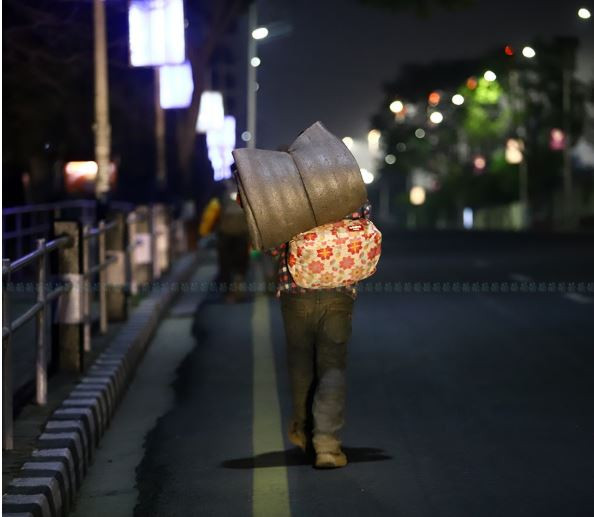 It was just another morning when I went to work and found out that the company was shut down temporarily. Later we learned it was due to a new virus-coronavirus. I could barely read a few words and letters, how would I know what it meant?  I was lucky I was in my own country although it was 600 km away from home -unlike my brothers who had gone to India to earn.

There was no certain time the company would reopen and we could earn again. I was a daily wage worker and we had to pay twice for food at Solukhumbu than Kailali. We heard the virus could kill all of us if only one was infected. All I could think of was my wife and my two little boys. Had I known about the virus, I could have left earlier through the bus. It was too late, the only option was walking. “If I really had to die, I would be happy to die with my family where I belong”, I thought.

I was lucky I wasn’t alone; I could count the men from Kailali on both hands. Walking all the way was crazy but still, I found the courage to start the journey. I carried a blanket, a little mattress, some packet foods, and a little cash and started walking with my friends. I was scared to death of what would happen, how we would conquer 600 km, also what would the police do. But the thought of my family gave me hope and I was motivated to choose the only option. There were ups and downs, rivers and jungles. We walked during the day and took breaks in between to eat whatever we had. We would cut the woods and light a fire.

Nights were the hardest. We slept mostly in the river banks or jungles. One of my friends carried a phone, all of us used to call our families once a day and he would turn it off to save the battery. My family’s thought was giving me strength but I couldn’t talk to them. She would ask me how I was and where I was. What would I say? I didn’t know what to say. People ran away from us, only a few would tell us ways and some were really nice - they would draw a little map.

After many days, we reached Kathmandu. I never had a chance to see what it was like. I had heard a lot, how the city is so amazing and you see so many people there. When I saw it on my own, it was empty, there were houses and buildings all around. Since there were no jungle or rivers and also the police wouldn’t let us sleep on the road, we decided to stay at Ram mandir near Pashupatinath and spent the night there. My feet were swollen; even worse- one of my friends' feet were turned white due to shoes all day long and walking.

The next morning there were many who were confused and concerned about us. However, we remained quiet, we had no answers, and we had no strength to explain anything. A few people from an organization came with fresh foods. I was more than happy to eat good food after so long. “Maybe it was Pashupati Nath, maybe God heard us, maybe that’s why the monkeys around didn’t annoy us even once during the night.” I wondered. After eating, my hope grew stronger. I prayed to the god and I felt self-motivated.

We packed our bags, this time with more foods that people had donated to us. It was the first time the police stopped us and warned us about being arrested. So we decided to start walking in the evening. When we reached Kalanki, we found a truck. I along with my friends begged the driver. My hope grew when he was fine although it was at our own risk. There were few others inside, like us. Since we weren’t allowed to talk, it was so nice and peaceful. I felt myself smiling after so many days. The journey went smoothly until we reached Bardiya where we had to get off. I felt closer to my home; the air around was so warming. I called my wife and for the first time, I was so confident and told her that it wouldn’t take more than 3 days.

The local policemen felt like brothers. They asked us to rest and the locals offered us food. They were more than surprised when I told them about our journey. A policeman asked me for our contact information and asked us to maintain distance and walk slowly. After a few hours, we received a phone call. It was from the mayor of our place in Kailali. He sent us a truck to pick us up. God really heard our prayers. When we reached Kailali my heart skipped a beat.

My sons came running towards me and hugged me so tight. I swear that was the best feeling ever. Tears of joy in my wife’s eyes were so innocent and so pure. They asked me how the journey was but at that very moment, I forgot everything that I went through, every trouble I faced. I forgot about my swollen feet, I was able to jump high. I can’t tell if the 7 days I spent were the worst, but I do now what I felt after meeting my family was worth more than anything.