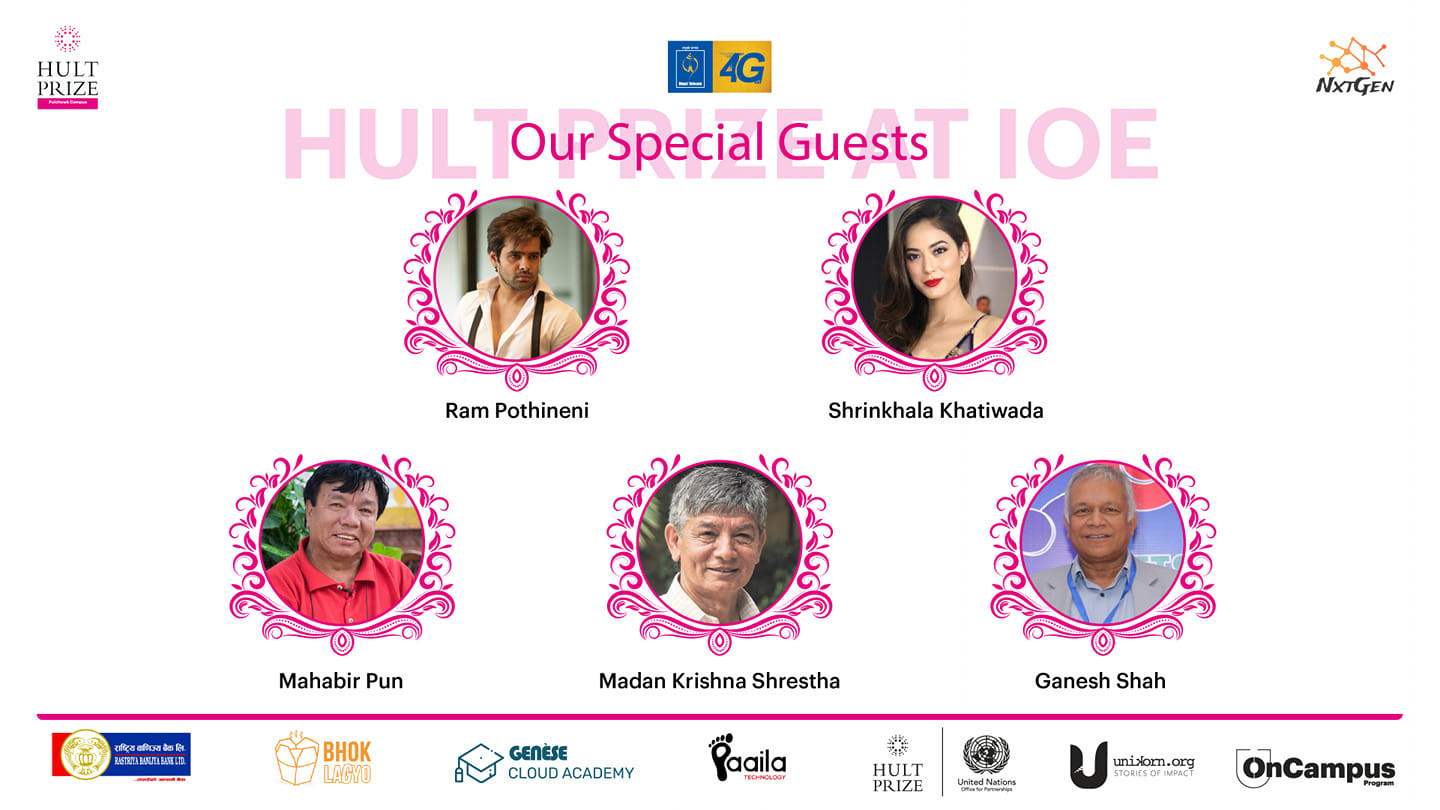 NXTGEN, an organization of students from Pulchowk Engineering College and Hult Prize at IOE are collaborating together to organize the grand finale of the “Hult Prize at IOE 2020-21” on December 5 i.e. this Saturday.

A few years back an event named ‘Entrepreneurship Talk Series’ was organized which got a lot of popularity as well as great engagement from people. This was the pre-event following the grand event i.e; Hult Prize at IOE 2020-21. Saturday’s event would be the major event of the preceding one. 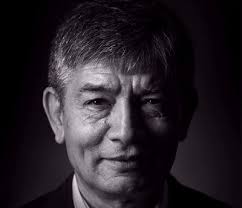 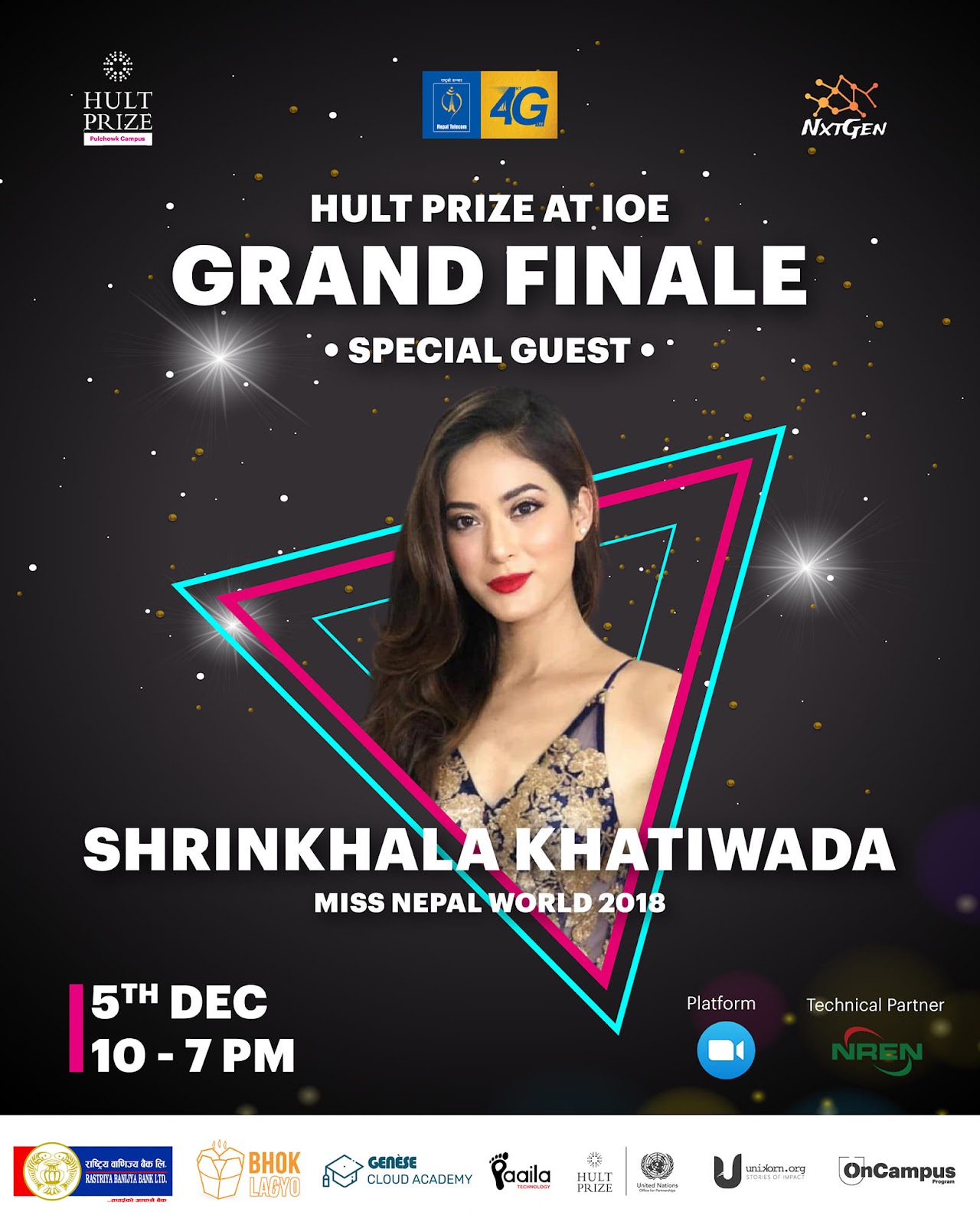 At this event, Madan Krishna Shrestha from MahaJodi will be one of the major guests among many of them. Telegu Flimstar, as well as activist Ram Pothineni, Miss Nepal World-2018 Shrinkhala Khatiwada, ex-Minister of Environment, Science and Technology Ganesh Shah, Social Entrepreneur and activist Mahabir Pun, and popular singer Swoopna Suman, Vlogger/Rapper Girish Khatiwada, singer Sudin Pokhrel, Champion of Comedy Champion season 1, Himesh Panta, would be the other guests who would be there at the event. 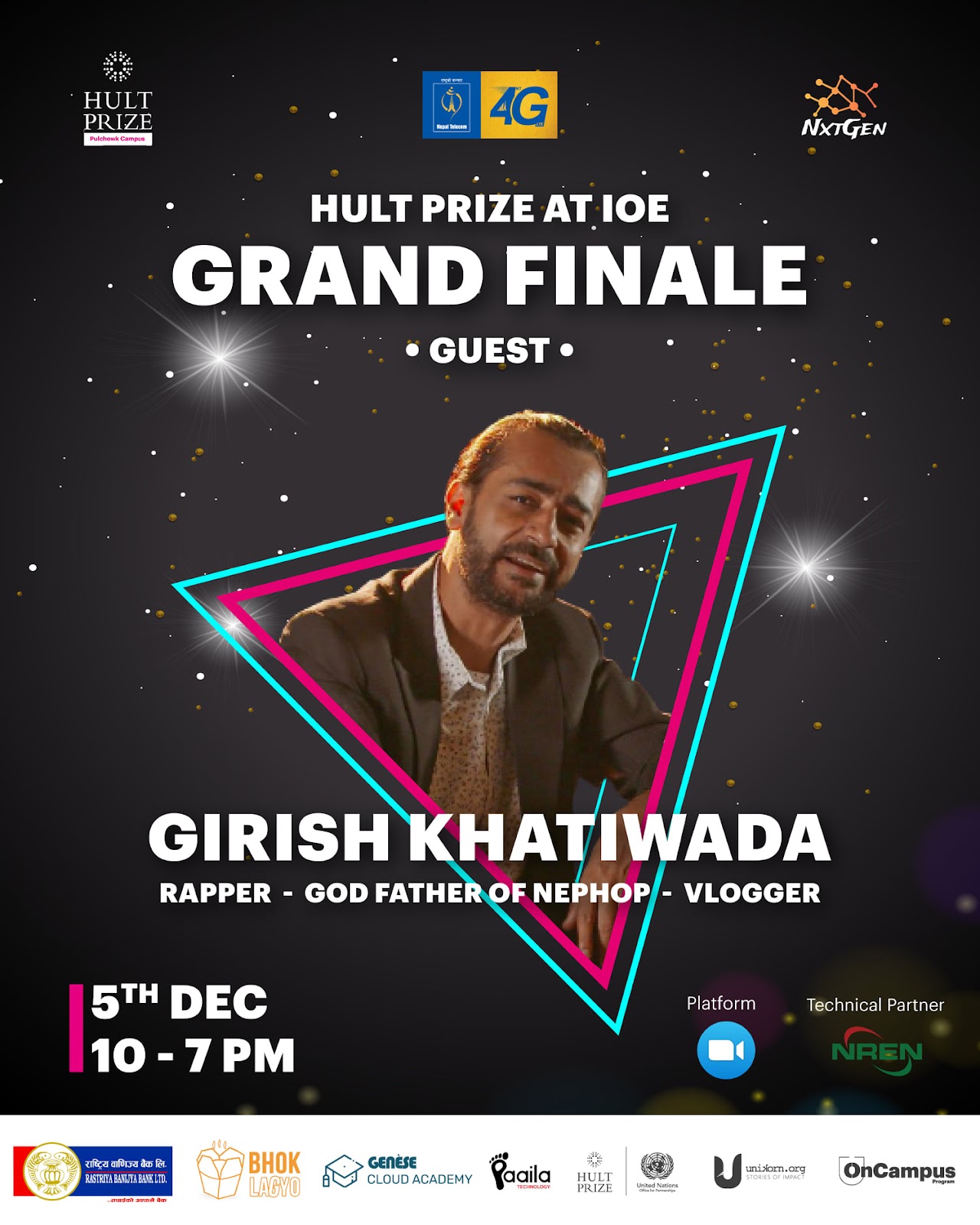 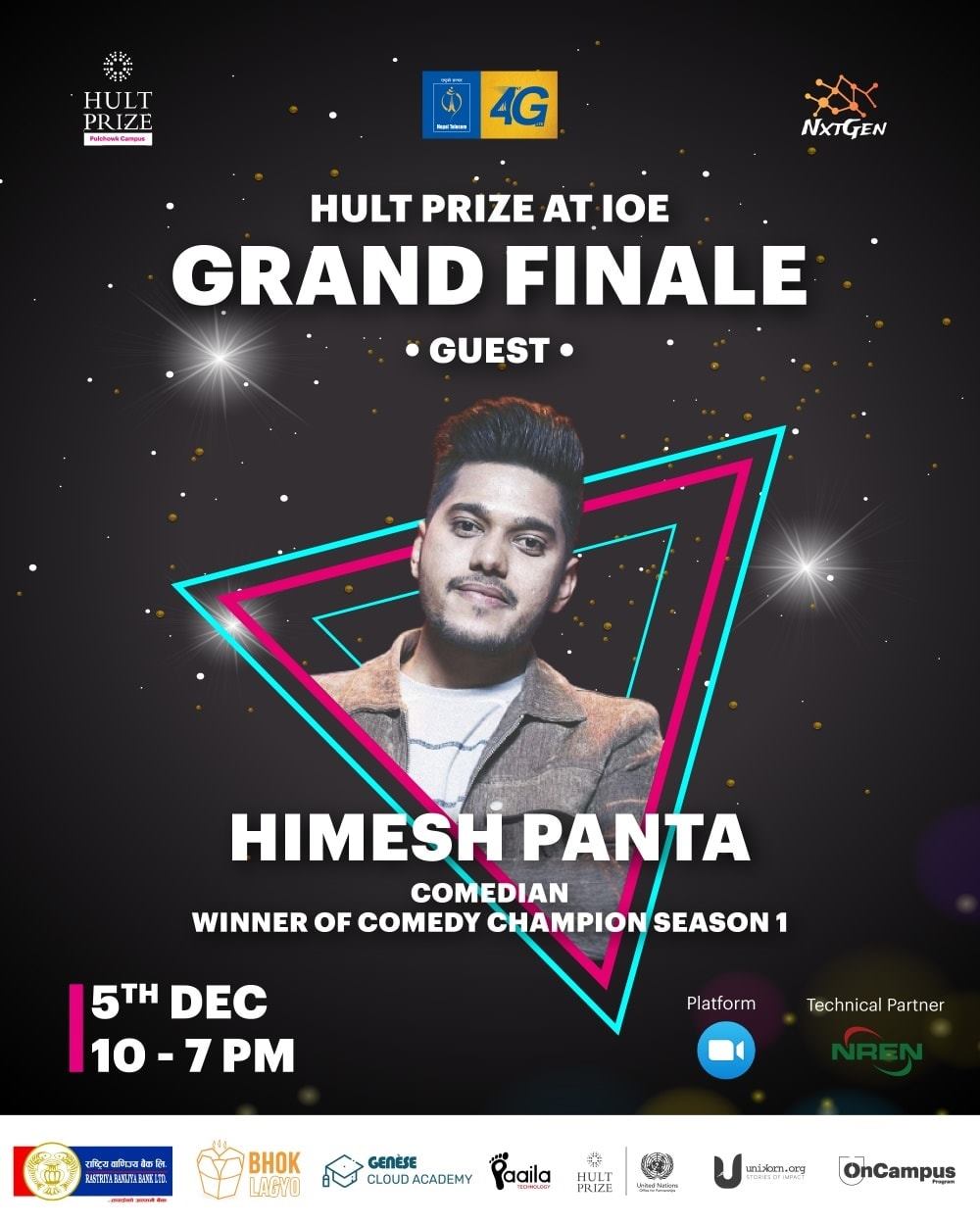 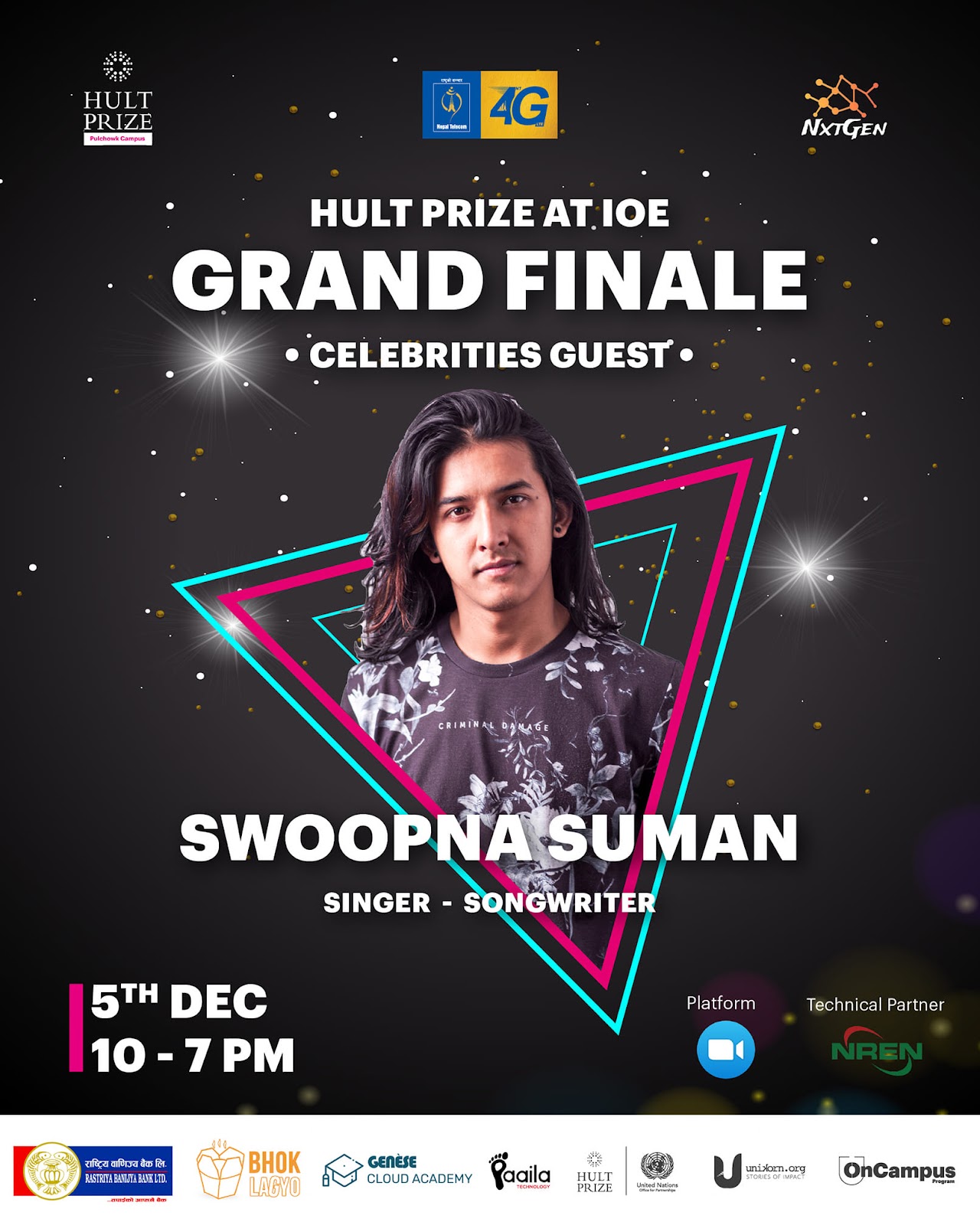 Similarly, the judges on the final event of Hultprize at IOE 2020-21 would be Dr. Suryaraj Acharya, an expert on political and development infrastructures, COO at Wonsulting, Former Senior Strategy & Operations Manager at Google Jerry Lee, ICT Officer at WHYFARM and Co-Founder at Seed4DSower Luke Smith, Founder and CEO at Preneur Lab Limited Arif Nezmi, Independent Strategic Advisor at Chapter Zero and Partner at Deloitte Sam Baker, featured by the UNESCO Blue Dot Magazine as one of the 13 global youth voices in 2015 and Executive Director of SERAC-Bangladesh SM Saikat. 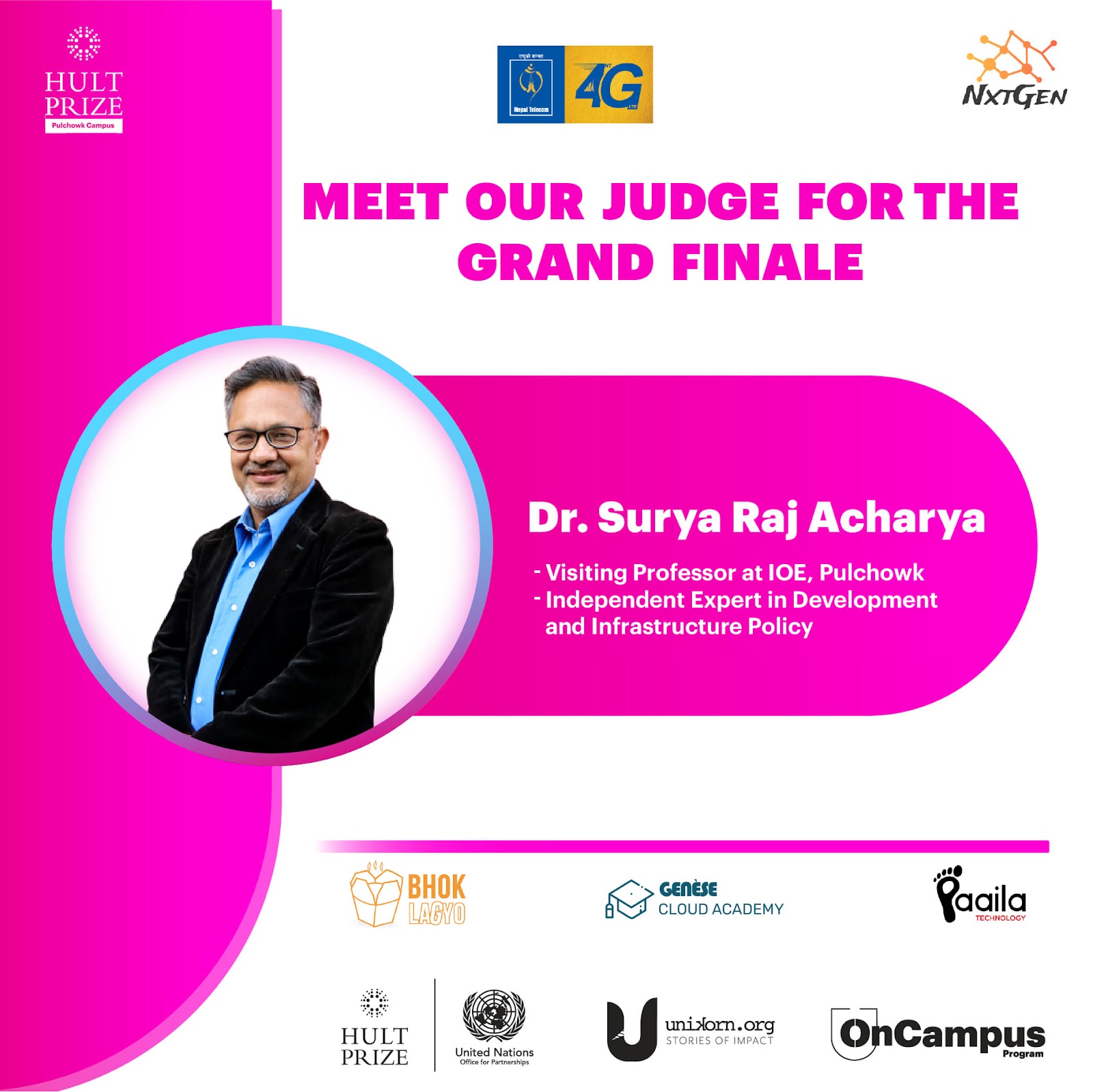 They will select a winner from 25 teams coming through 13 different engineering colleges. The best team would be selected in terms of the idea and presentation.

These teams have participated in many workshops and training which was organized virtually by NXTGEN and Hult Prize at IOE 2020-21, a student organization of Pulchowk Campus as well as the Hult prize at IOE. Special training and workshops included national/international experts.

The students who participated in Hultprize at IOE 2020-21 could get giveaways and prizes which is equivalent to NRS 12 lakhs in terms of monetary value. The students who finish in the top 3 could get an opportunity to participate in the regional competition which would be organized abroad. 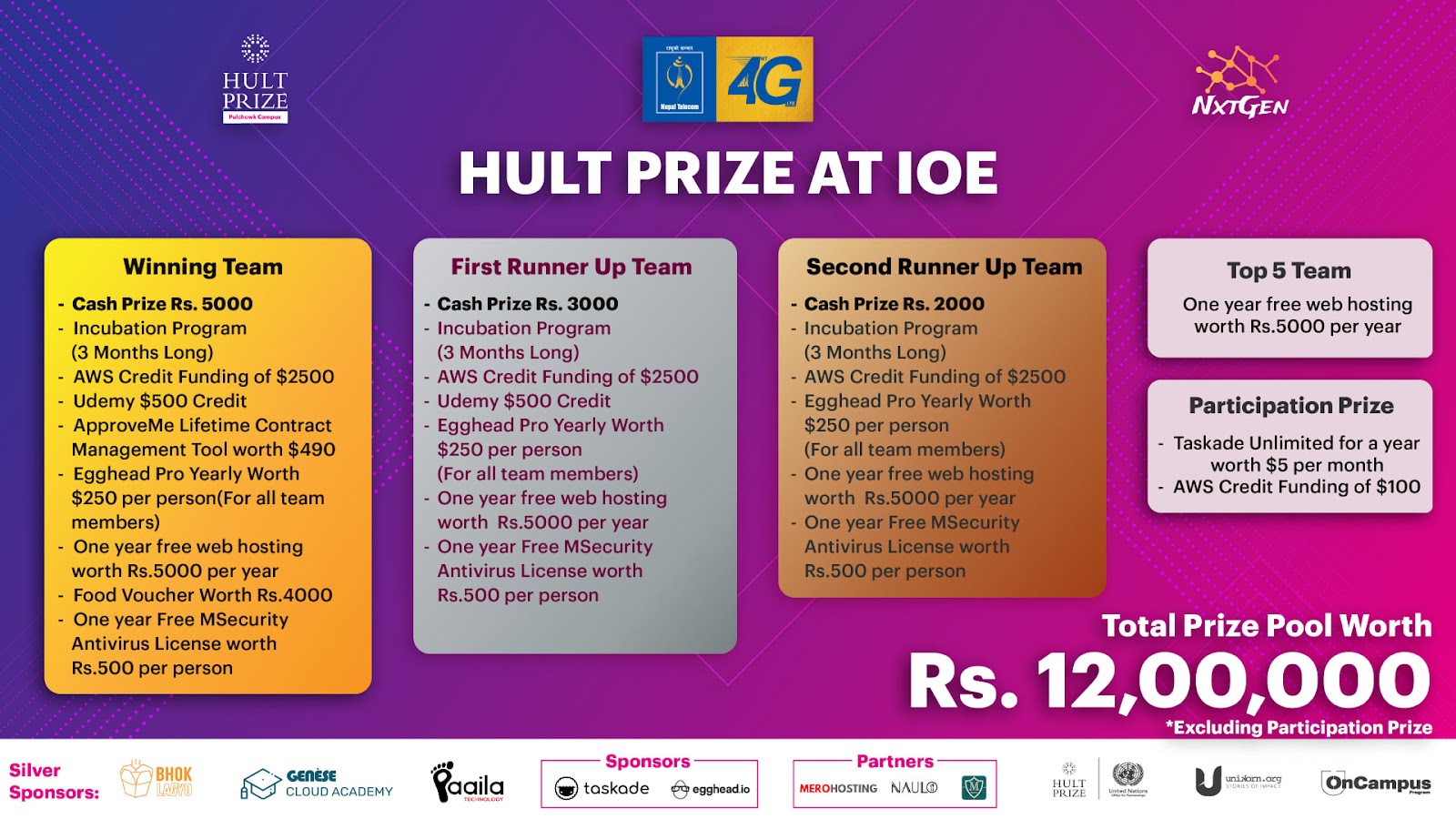 Nepal Telecom is the platinum sponsor for the Hult prize at IOE 2020-21 and Rastriya Banijya Bank is the Golden sponsor.
On the following day, there would also be many entertainment events from cultural programs to many more. The program would last from 10 AM to 7 PM. You can register for the Hult prize at IOE by going to this link:
https://forms.gle/mXXMDyDaWK9ApwAs8