Genshin Impact : The online gacha game that rocked the internet.

Genshin Impact is a free to play open-world, action-playing gacha game launched by miHoYo on September 28th,2020. The game is available on almost all platforms (PC, Mobile, Play Stations). The game wasn’t expected to be good and wasn’t as hyped as some of the more famous games like CyberPunk 2020 and Assassin's Creed Valhalla and gamers didn’t expect as much from miHoYo’s Genshin Impact but the game had a lot to offer. The adventurous journey to explore the huge and beautiful world of Tevyat, the beautiful graphics and visuals, the aesthetically cool, appealing, and beautiful characters, and the joy of leveling up your character and making them stronger and stronger to battle epic bosses and challenge stronger bosses. The characters each have their own set of skill sets and elements which are gifted by the gods of 7 elements known as vision as the lore goes. With so much to offer the game skyrocketed its publicity and earnings to be the fastest game to earn a billion dollars in less than 6 months beating the previous record of games like Pokemon Go and Clash Royale. 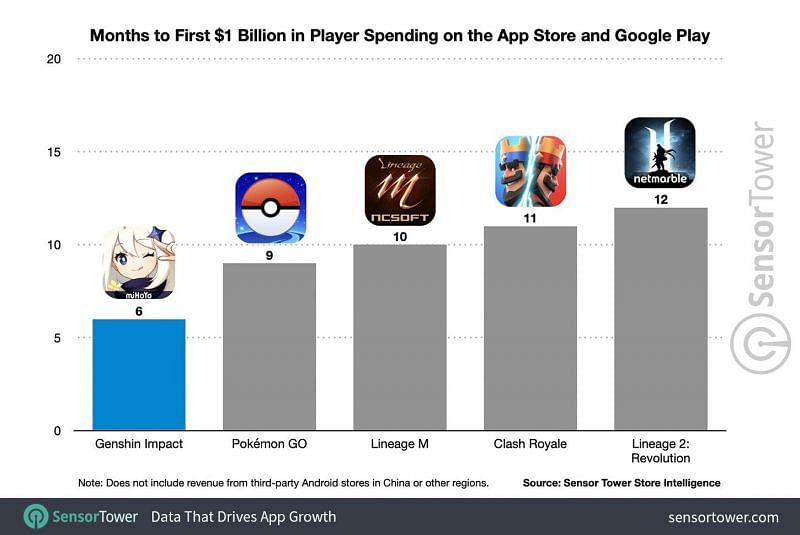 The game currently has 2 major nations Mondstadt(German: Moon City) and Liyue(Chinese: Glazed Moon) and a small mountain range Dragonspine and a new nation called Inazuma(Japanese: Lightning) was teased by miHoYo. The game has a main story quest that rotates around a twin brother and sister Aether(brother) and Lumine(sister) which is yet to be completed.

Genshin Impact has attracted many otakus and anime lovers as the characters share the same voice actors from famous anime characters like Kirito from Sword Art Online (Yoshitsugu Matsuoka as Xiao from Genshin), Overhaul from My Hero Academia (Kenjiro Tsuda as Dainsleif from Genshin), and also Megumin from Konosuba(Rie Takashi as Hu Tao from Genshin). Though Genshin Impact is a great game it still has many flaws. The game is still in development and the main storyline has just started. The game has a “Resin system” which limits players from playing more. The players still complain about the lack of content and the amount of repetitive content. Although the game is free to play, you can still load funds and purchase in-game currency which is unreasonably expensive for a free-to-play game. The gacha system promotes gambling which might turn into an addiction. Many players spend thousands upon thousands of dollars in this game which the gamers refer to as “whale’s” as they couldn’t control their addiction and if you want to collect all the characters and weapons, then you will be one of the prime examples of a “whale”.

Within just six months of the game's initial release, Genshin Impact won the App Store Game of the Year 2020 and TapTap game of the year 2020 award. Genshin Impact is a game worth your time to play if you love a great story, adventure, anime, and even gambling.