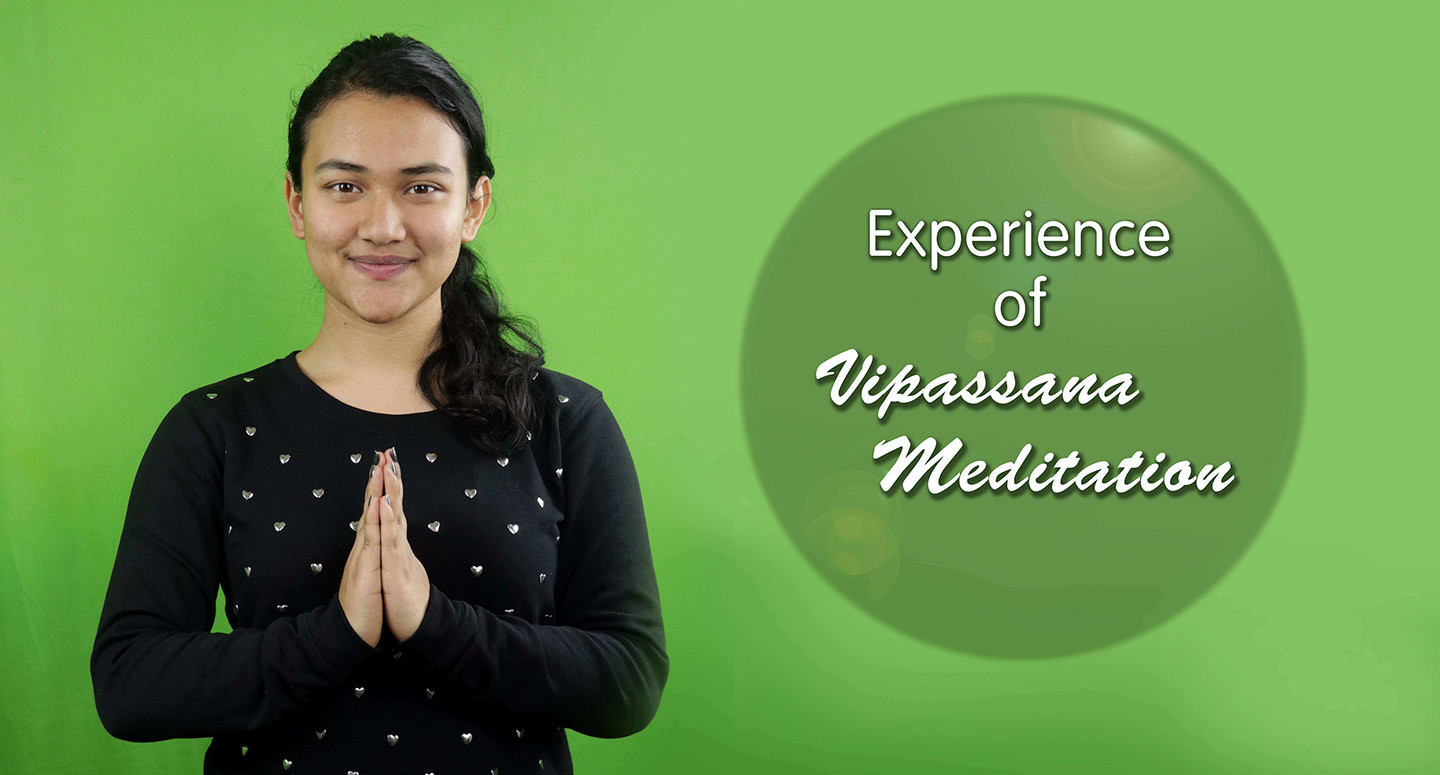 Vipassana, which means to see things as they really are, is one of India's most ancient techniques of meditation. To help us walk on the path of knowing Vipassana meditation more clearly we have Avina Nakarmi of Batch 2020 with us, who had taken this 10 day Vipassana meditation in December 2019.

For starters who don't have knowledge of meditation or to be precise, Vipassana meditation, how would you like to introduce it to them and how is it different from other forms of meditation?

Vipassana is a type of meditation in which Buddha himself rediscovered it. To be precise, it’s actually observing yourself, avoiding the external materialistic kind of stuffs and just looking into ourselves, our emotions, and our reality.

With what I’m familiar with, other meditation usually involves a lot of chantings and you can even see at Pashupati where people play loud Bhajans and dance and meditate there. Instead of concentrating within yourself, you’re concentrating on external factors but in vipassana, you look into yourself, and the things you’ve experienced. While meditating, you learn more about yourself and you feel new sensation.

Why did you take Vipassana meditation course?

You know the schedule of Deerwalk, classes start from early morning and ends in the late evening, internships and everything plus we had additional projects during 5th-6th semester. So it was kind of hectic to keep up, there was just so much going on. After all my deadlines, I was free at that moment and I thought it would be helpful if I went to Vipassana meditation, in order to reduce the amount of stress that had built up.

How did you come to know about Vipassana meditation? Were you encouraged or influenced by someone into taking it?

Actually, during my teenage time, my cousins used to go for Vipassana meditation but at that time, I couldn't go. It had quite slipped my mind after that but recently our Image Processing sir, Sarbin Sayami had taken this course and he shared his experience with us which motivated me into taking it.

They say that taking Vipassana meditation is not an easy task as it requires a lot of determination, how well did you cope up with it?

To be honest, the first few days were really hard. The routine included waking up at 4-4:30 A.M then heading out for straight 2 hours of meditation. The breakfast would be casual boiled healthy foods but even the simple food would taste extremely good and awaited after the intense 2 hours meditation. The major difficulty I faced was to sit erect without any support continuously for 3-4 hours while meditating as I was used to sitting on chairs with support. We were only allowed to go out 2-3 times. There was the system of early sleep so we had to go to bed at sharp 9 P.M, the first few days I couldn't fall asleep at all because it wasn’t my usual routine. But after 4-5 days, I got used to it.

Vipassana meditation is a universal remedy for universal ill, what is your say in this? Can you relate it with your experience?

I can’t relate it with myself because I haven’t been through the stage where I felt very low in my life but I've heard stories of people who went through severe depression and physical illness like diabetes and after taking vipassana course they felt relief to some extent and some of them were even cured wholly.

While I was researching about Vipassana meditation, somewhere I found that after vipassana course few individuals fell into depression because vipassana course walks you through the path of isolation in order to reflect within yourself and as a result, it resurfaces the trauma an individual had felt before in his/her lifetime. What is your view on this?

When we are isolated it’s normal for many thoughts to resurface, which tends people to get sad and depressed but that’s why the teachers are there, they are so friendly and they will make you feel comfortable so you can express yourself to them. The trauma, you relieve it for a while and then you start to accept it, whatever happened, it happened in the past and it’s gone now. You’ll realize that everything is just a phase. And once you get used to that, every sadness or any extreme feeling like excitement, fear will be just a phase, a phase that will go away so you don’t tend to cling on stuff anymore.

How can we join this course?

If you’re interested, you can fill out the form at City office, Jamal. It’s situated near the Honda showroom. There they give you a pamphlet and ask you to go through it before filling the form. You must have strong determination and will power for it as you’ll be going for 10 days where you can’t use your phone or any other devices, the communication will be limited with the teachers only. Before leaving for the meditation there will be a small orientation session where you have one to one conversation with the Guruba and Guruaama; what they tend to do is they ask you whether you’re fully determined to join this or not, if not then you shouldn't join as it is a hard course.

What changes have you felt after practicing Vipassana meditation?

You won’t feel the changes instantly, but eventually you’ll feel more relaxed. The fear, jitters, and nervousness I used to feel while interacting with people, I've learned to control it now. I feel calmer after having taken Vipassana meditation.

Would you recommend Vipassana meditation to others?

Yes, I totally recommend it to others. But I also recommend people to go with full determination so that you won’t have to leave it in the middle. You will witness the positive changes in your life after practicing vipassana meditation. The journey is not easy but the fruit of this meditation is so worth it