DOGE: To the Moon

The largest meme investment of 2021, Dogecoin the crypto-currency has skyrocketed 12000 percent since the beginning of January 2021. From 0.005 cents to 37.4 cents at present, it has been fueled by viral tweets from the former CEO of DOGE coin Elon Musk, memes, and rocket emojis signifying its boost to the moon.
The currency was started as somewhat of a joke in 2013 by Jackson Palmer, a product manager at Adobe. Making light of the entire cryptocurrency craze, Jackson tweeted “Investing in Dogecoin, pretty sure it’s the next big thing.” At the time it was a satirical joke based on a meme featuring a ‘Shiba Inu’ with ‘Comic sans’ thoughts popping up. To Jackson’s surprise, the Dogecoin tweets started gaining popularity on Twitter. After somewhat of positive feedback, Jackson was quoted saying “One night after work after work, I sat down with a beer and had too much time on my hands, and I bought Dogecoin.com. Then I Photoshopped the logo onto the coin and put it up there.”
Soon after, it was picked on Reddit and garnered the attention of Billy Markus a software engineer at IBM who reached out for permission to build software to turn Dogecoin into a fully functioning crypto-currency. Not even a month later, it was launched in December of 2013. Two weeks later, the value has jumped up by 300 percent due to a combination of viral press and China’s ban on Bitcoin. In functional usage, Reddit allowed Redditors to tip each other in Dogecoin while a few mobile applications allowed in-app purchases. All thanks to the virality of meme culture, in 2014, Dogecoin surpassed in trading volume for all digital currencies.
Since then, the following of Dogecoin has grown significantly. In 2018, Robinhood allowed Dogecoin transactions on their platform which increased exposure. It was further popularized by Elon Musk with a series of tweets. 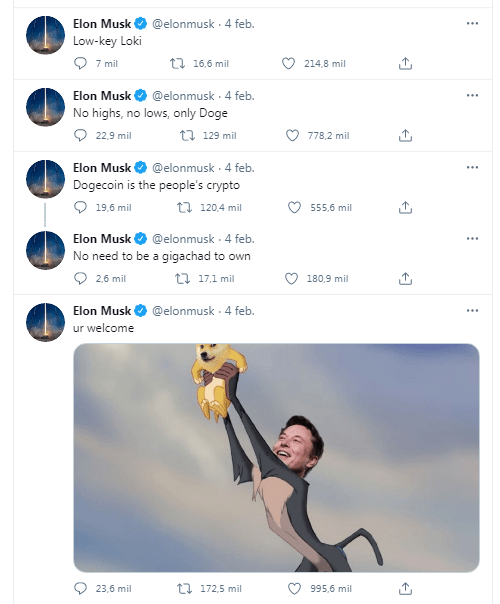 Img Src: Forex
On April 1st, Elon Musk had tweeted “SpaceX is going to put a literal Dogecoin on the literal moon.” Ironically, it will be the first meme in space. These tweets caused the price of Dogecoin to surge within minutes. Today Dogecoin has a market capitalization of $48.34 billion and is trading at around a price of $0.3747.
Addressing the Elephant in the room, does it have an actual value? And is it a good investment? Now the answer to these queries is uncertain despite its success, as the currency was not meant to have much intrinsic value. Dogecoin is derived from an open-source project light coin which can be mined limitlessly. The exact opposite to Bitcoin which has a limited circulation of 21 million coins in existence. There are 219.90 Billion Dogecoin in supply and increasing. Each year, the supply of Dogecoin could increase as much as 5 billion, encouraging people to actively spend it and use it as currency. Otherwise, over time the value of Dogecoin might decrease as more enter circulation. As of now, it represents an inflation rate of about 4 percent per year. However, as these coins are mined over time the 5 billion amount will represent a decreasing difference when compared to the total no of coins in circulation.
Theoretically, it could be fairly stable in 100 years with very mild inflation. For example, The US government guarantees that a $100 bill will allow an individual to buy $100 worth of goods. But when the number of produced bills is increased, the purchased amount of goods decreases. As for the question, Is Dogecoin a good investment, we need to look at the big push away of people from Mainstream corporations and Wall Street institutions. People feel comfortable trusting Dogecoin as it is a light-hearted spinoff on other cryptos created by two people as a parody. This phenomenon was also demonstrated by Will Rogers who believed politics was ridiculous. To prove his point in 1928, he created a mock campaign to run for president based only on an outlet published in a weekly humor magazine where his only campaign promise was to resign immediately if he won the election. Until the day of the election, Rogers made jokes about the entire process, won the election, declared victory, and resigned immediately. Hence we learn that people like and feel comfortable about someone or something who doesn’t try to be the next new thing.
For investing, Dogecoin is detached from reality and functionality as the price of Dogecoin could increase or decrease based on its popularity. As displayed by tweets from popular personalities such as Snoop Dog, Elon Musk, and Gene Simmons. People are viewing Dogecoin as a way to become rich overnight. But due to the instability of the internet fame and attention which changes each day, as a serious investment, it is not sustainable to invest and would be irresponsible to suggest it.
Hence the creators of Dogecoin state “if they have brought awareness to the people about decentralized currencies such as Bitcoin, then they have done a good job.” People have started learning about crypto mining and the origin of cryptocurrencies. The presence of Dogecoin in the crypto market has led to a lighthearted, fun, and positive impact overall.