D-Day: A day of Sacrifice

Soldiers, Sailors, and Airmen of the allied expeditionary forces!
“You are about to embark upon the Great Crusade, towards which we have striven these many months. The eyes of the world are upon you. The hopes and prayers of liberty-loving people march with you.”
These were the faithful words read by each man taking part on the day of infamy. June 6th, 1944, the liberation of the people of Europe was about to begin.
Five years earlier, Adolf Hitler and his German war machine invaded Poland, commencing the Second World War. Nazi Germany, Italy under Mussolini, and the Empire of Japan had simultaneously formed a pact and invaded different countries to expand their territory calling themselves the Axis powers. In the European theater of war, the Nazis at the end of 1941 had successfully controlled mainland Europe through their Blitzkrieg tactics. They had chased the British expeditionary forces from Dunkirk and had occupied France. Thus marking the darkest hour in human history.
After the bombings of Pearl Harbor by the Empire of Japan, the United States, a sleeping giant had awakened. With the victory of the British in 1942 at Egypt against the Desert Fox, Erwin Rommel and the Battle of Britain, was a sign of relief as the American 1st army joined the battle in Africa. In early 1943, the invasion of Sicily had targeted Italy to carve a path into Berlin, the soft underbelly of Europe, to open a front in the Mediterranean. With the bog down of the Allied forces in Italy, the allied generals planned to open a new frontier in France. As the Soviets had been facing the full brunt of the Germans in the Eastern front, Joseph Stalin had persistently urged Winston Churchill and Franklin D. Roosevelt.

By 1944, more than two million men from more than 12 countries had gathered in England to train for the ‘Invasion of Normandy’ designated ‘Operation Overlord’. Hitler had boasted about the impenetrable ‘Atlantic Wall’; A series of defenses laid out on the beaches and above to deter any invasion. The Allies, out of a spy movie, created a Phantom Army to deceive the Germans. They put a lot of effort to convince the Germans that the invasion was going to be near Calais, not Normandy. By deliberately making Tanks and Planes of inflatable rubber and wood.  As a result, the number of German defenders at Normandy was significantly reduced. 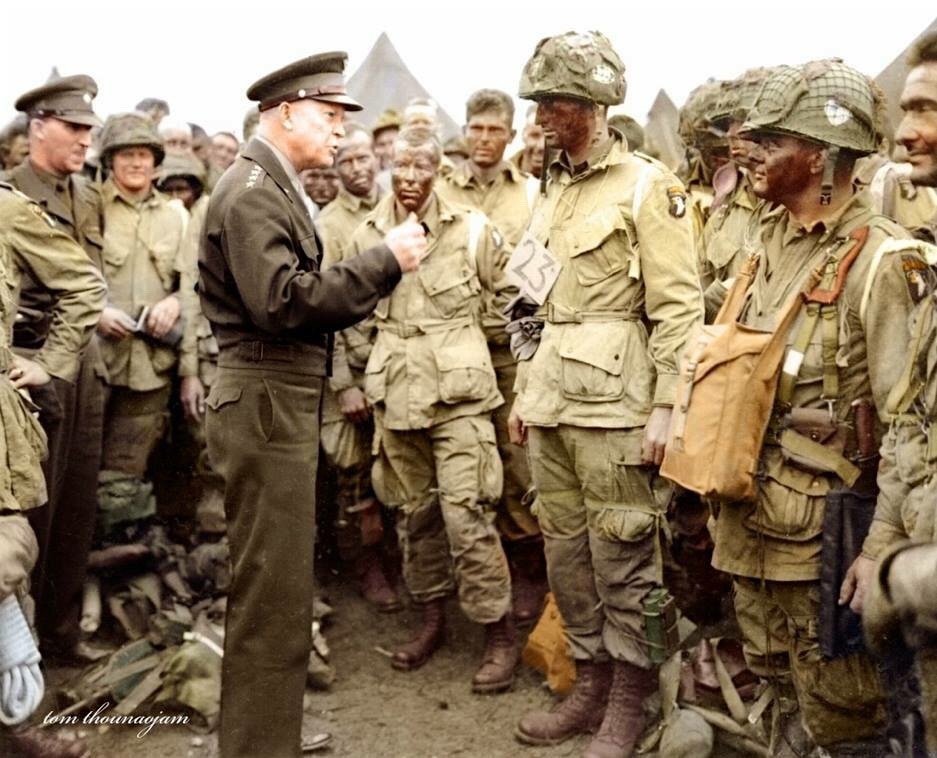 AIRBORNE DIVISION:
At midnight, June 6th, The Paratroopers got into planes to jump behind enemy lines a few hours before the landing on the beaches. Around 13,100 men from the American 82nd and 101st Airborne and 7,900 men from the British 6th Airborne Divisions took out strategic targets. These men missed their drop zones due to heavy flak gunfire. Some were gunned down as they jumped, while some were caught in trees as their parachutes acted as nooses around their necks, suffocating them slowly. As they hit the ground, they found themselves scattered through Normandy. Even in chaos and separation from their units, these men banded together and started taking their objectives. By 6 am, they had completed most of their objectives and had 3,800 KIA (Killed in Action). Hence they have been declared heroes of liberation as the success of D-day depended on the bravery of these Paratroopers.

At 5:30 am, the troops started loading into Higgins boats (Landing Crafts). They were headed to storm Hitler’s Atlantic Wall with fear and seasickness. The troops were cold due to the waves hitting them as they reached the beaches at 6:30 am. Omaha beach was designated ‘Bloody Omaha’ due to the number of casualties sustained by the American troops who stormed the fortifications up the beach. As the first wave of American troops hit the beach, Machine guns and Mortars rained down upon them even before they hit the shore. Some drowned in the sea due to the heavy equipment they carried while some landing crafts exploded killing everyone inside instantly. Due to the high tides, a portion of the beach was underwater and the troops had to swim towards dry sand under heavy fire. 90% of the waves were KIA or MIA (Missing in Action).
These men in the face of death rushed towards the beach shingle to take out the enemy defenses. After hours of brutal fighting and countless men getting gunned down or blown apart. The Americans finally secured the beach with 3000 losses either MIA or KIA.

The other beaches had similar stories, but due to the sabotage of enemy equipment by the airborne divisions. The landing was less contested on beaches: Utah, Gold, Sword, and Juno. The casualties were 80% lower than the other beaches. At the end of the day, an overall of 10,000 allied casualties had accumulated. The war ended after 11 months of the invasion.

Rangers, Lead the Way! :
Pointe du Hoc, an elevation nestled in the French mainland, was idle for artillery and coastal defenses. 7 km east of Omaha and 11 km west of Utah, the Germans had placed 155-mm guns and fortified the positions. They could fire upon the American landing beaches which could jeopardize the entire invasion. US Army Rangers from the 2nd and 5th battalions were assigned to land on the beaches below the cliff of ‘Pointe du Hoc’, scale them and destroy the guns. 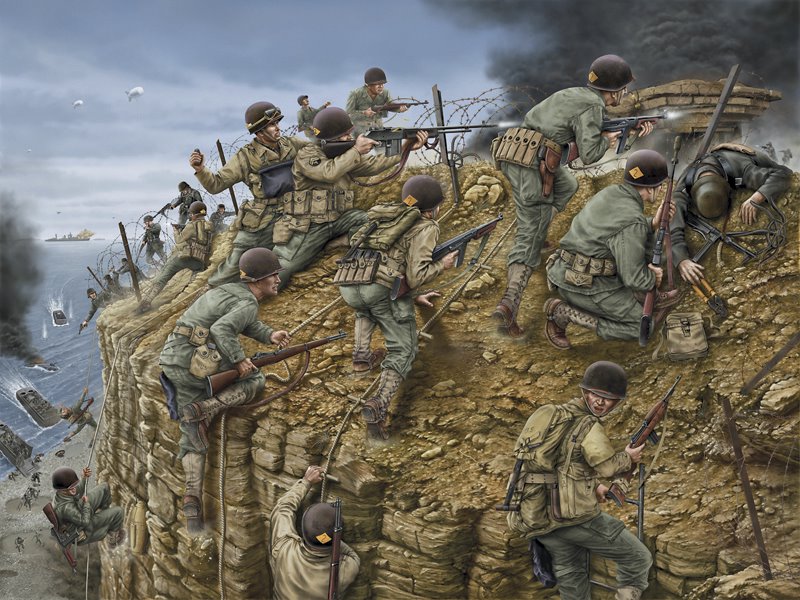 Img Src: Military-Art
At 7:10 am, the Rangers of the 2nd battalion, companies D, E, F, and C  landed on the beach under heavy fire from machine guns and small arms on top of the cliff. While the A and B companies along with the 5th Rangers landed on Omaha beach due to confusion of signals. The landed Rangers shot rope ladders attached to hooks and started ascending under the threat of German fire and grenades. Within minutes the first of the Rangers had reached the top and to their surprise, the guns had been removed. They regrouped and pressed forward cutting the road behind the Pointe, while a two-manned patrol went south and found the guns some 500 meters from their cliff positions. Disabling the guns, they dug in to repel the German counterattacks. The Rangers repelled constant counterattacks short on ammunition and supplies until reinforcements from Omaha relieved them two days later. 225+ men had arrived while 90 remained standing at the end. These were the Rangers of ‘Pointe du Hoc.’
June 6th marked the 77th anniversary of D-day: Invasion of Normandy. This was a crusade of freedom, a fight against evil and tranny. The men who participated were devoted to their duties as ‘Liberators’. They were aware of the sacrifice required for a free world, hence they paid for Freedom and Liberty in blood. The liberated people cherished these heroes who saved them from oppression. Without their sacrifice, a world with the Internet, Freedom of Speech, and human rights would’ve been non-existent. They fought on that fateful day to protect and create a free world for the upcoming generations. So, let us learn and cherish their ‘Tales of Valor’ forever.