CHINA LANDS ITS ROVER ON MARS On May 14, 2021, China landed its first rover named ‘Zhurong’ on Mars, becoming the second nation to successfully do so. The mission has been run by the China National Space Administration (CNSA). The rover was attached to the Tianwen-1 spacecraft, which arrived in Mars’ orbit in February 2021. After orbiting the planet for more than three months, the rover separated from Tianwen-1 and successfully landed in the Utopia Planitia, a vast plain on Mars.
Zhurong, named after an ancient Chinese fire god, is a six-wheeled rover that is equipped with six scientific instruments, including two panoramic cameras, a ground-penetrating radar and a magnetic field detector. The radar can be used to detect pockets of water beneath the surface of the planet. It also consists of a laser that can be used to zap rocks and study their composition. It has a meteorological instrument that will help to study the climate on Mars.

Zhurong can communicate directly with Earth or use the Tianwen-1 orbiter for high-speed data relay. On May 19, China released the first two images of Mars taken by its rover; one black and white image and one color image. The black and white image showed a deployed ramp and the flat Martian surface where Zhurong landed. The color image showed that the rover’s solar panel and antenna have unfolded normally after landing.
Being able to successfully land on the Red Planet has helped China to take a major leap in their space program. No nation had ever sent an orbiter and a rover to Mars on their first try. But China succeeded in doing so, making this a historic victory for them. This rover will help make important discoveries concerning water and past habitability on Mars. It will also pave the way for future human missions to Mars. 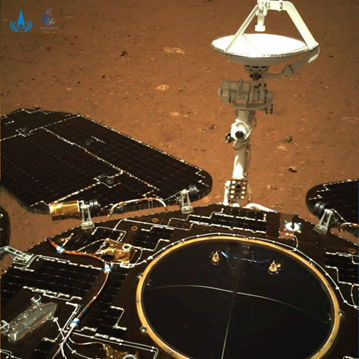 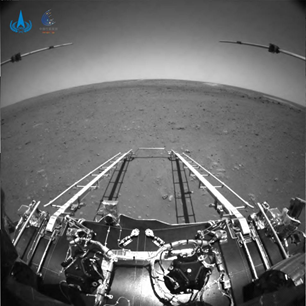