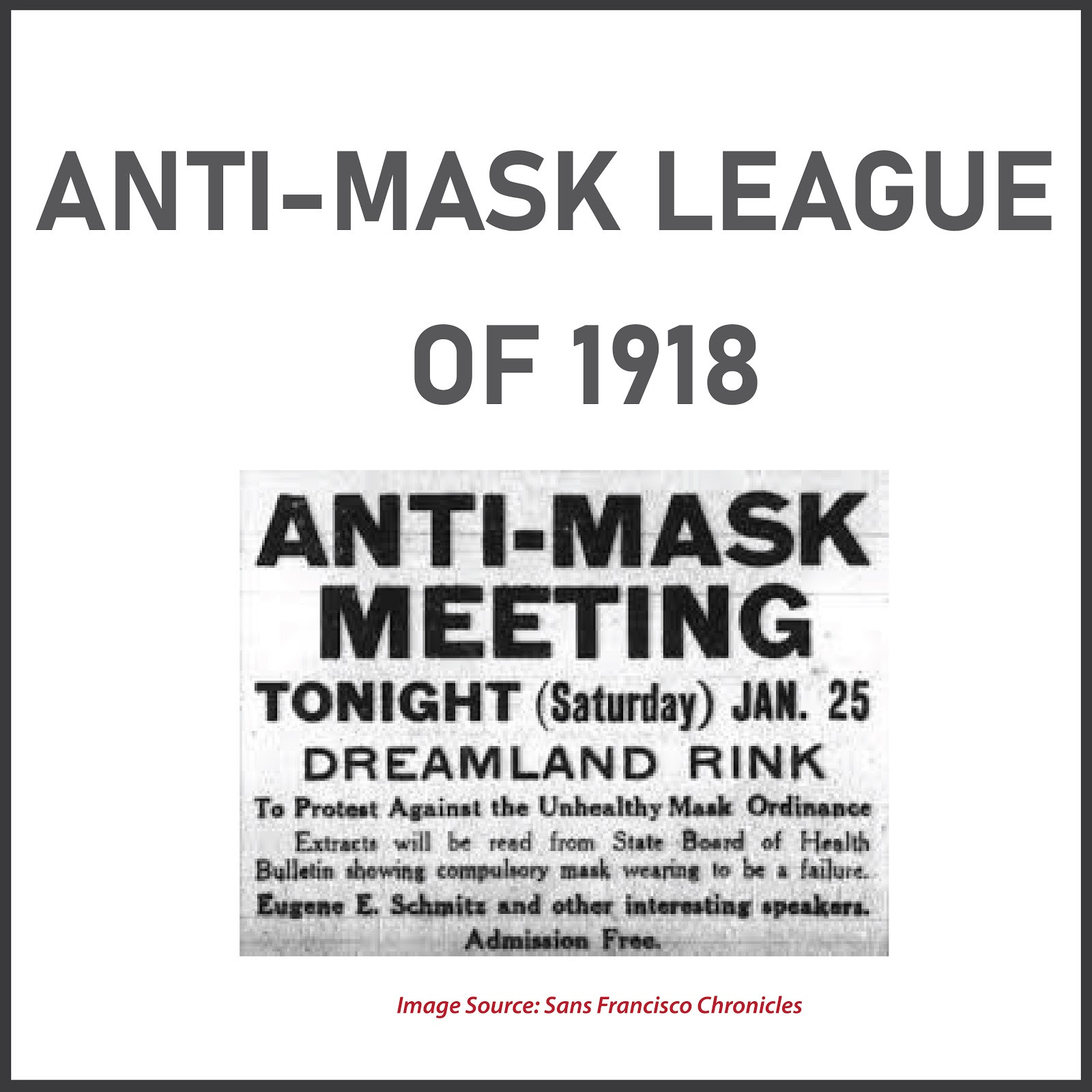 A century ago, the influenza pandemic had hit San Francisco harder than any other major US city with:

If we look into history, the protests in late 1918 and early 1919 helped turn a manageable public-health situation into a disaster. It was the now-forgotten movement known as the Anti-Mask League.

In the middle of a devastating global pandemic, a few thousand people had gathered in San Francisco to protest against measures meant to slow the spread of the virus. Many of the protesters at the meeting claimed the measures were trampling on their constitutional rights whereas a few others argued that the measures weren’t working anyway.
The group called itself the Anti-Mask League.

The first cases of the 1918 flu reached San Francisco in late September of 1918, right around the time Philadelphia was planning its ill-fated War Bond parade. Less than a month later, more than 2,000 people in the city were sick. San Francisco’s Board of Health issued some recommendations that sound a lot like life in most of the world today,  telling people to wash their hands and avoid crowds.

After a few days of debate, the city closed its dance halls, theaters, movie houses, and schools, and prohibited large gatherings.
San Francisco joined other cities around the country in recommending that people should wear masks anytime they were out in public. Some people complained saying masks were a hassle, having people to wear them was unconstitutional. 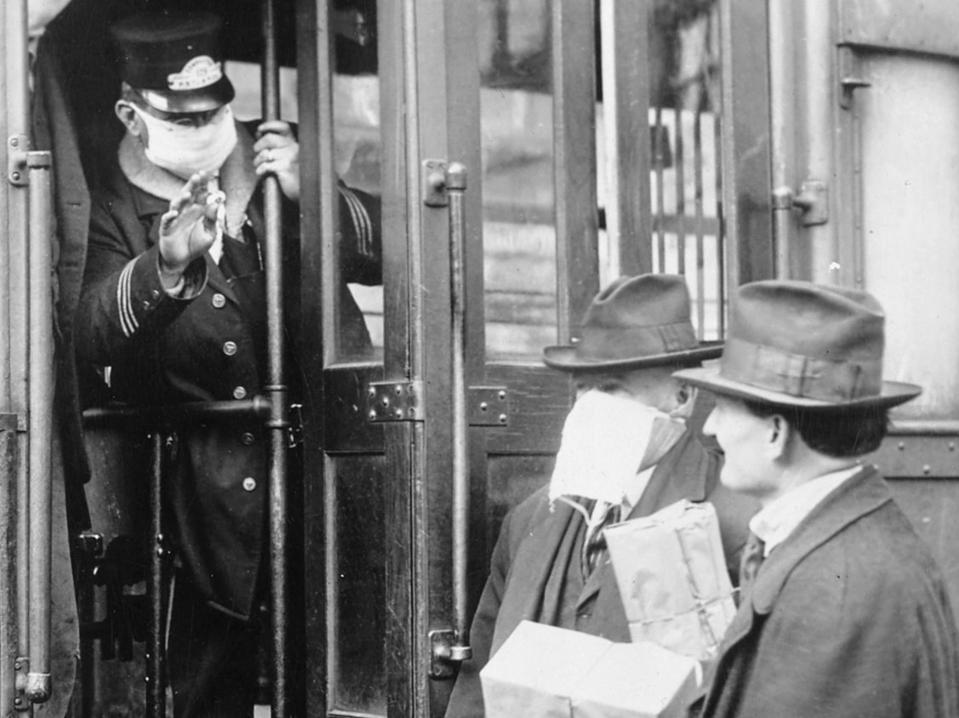 A trolley operator refuses to let a passenger without a mask on board. FORBES.COM

By late 1918, masks had become a national symbol of responsibility and patriotism.

“The man or woman or child who will not wear a mask is now a dangerous slacker,” declared the Red Cross in a public service announcement. In cities like San Francisco, people found not wearing masks were charged with “disturbing the peace.” Most paid $5 fines which went straight to the Red Cross. Some people went to jail until crowding people into jails during a pandemic was not a great idea.

Masks, effective or not, had become an important symbol that the wearer was willing to do their part to fight the pandemic. Around the country, there were even a few reports of maskless people being attacked in the streets.
When San Francisco rescinded its mask order on November 21, 1918, just 10 days after the end of the war, people ripped their masks off, tore them to pieces, and tossed them into the streets.

The Second Wave And The Anti-Mask League

Gradually, the drastic measures taken by San Francisco and the rest of the country in 1918 seemed to work. By mid-November, fewer people were getting sick, and San Francisco began to re-open.

People packed into theaters, they were eager to get back to business. Then within two weeks, the deadly flu had made a dramatic comeback. Not only in San Francisco but all over the world, the second wave was worse than the first.

By mid-January 1919, the city officials again ordered people to wear their masks in public. And in the midst of the devastating outbreak, a group of between 2,000 and 4,000 people decided to hold a large public gathering in order to protest being told to wear masks.

The Anti-Mask League, as the group called itself, had members accounted for less than 1% of San Francisco’s population at the time (Approximately 4,000 people out of around 500,000). Ironically, that’s close to the same number of people who died of the 1918 influenza outbreak in the city. The Anti-Mask League wasn’t exactly a large grassroots movement, but its members included doctors and at least one elected city official. And at the time, even California’s state Board of Health was arguing that flimsy gauze masks were probably ineffective anyway.

Talking about the types of mask, it’s true that cloth masks are far from a perfect protecting shield against virus particles, but the best available data suggests that they’re much better than nothing when it comes to keeping infected people exhaling virus-laden droplets of spit all over the people around them.

Talking about the present time,  it’s possible to spread COVID-19 long before you realize you’re infected, wearing a mask is usually the responsible thing to do, just like it was in 1918. Because “SOMETHING IS BETTER THAN NOTHING”. Being responsible and following the precautions given by WHO could be the best thing until we all get the vaccine to cure the virus.