Anime Review: Your Lie in April 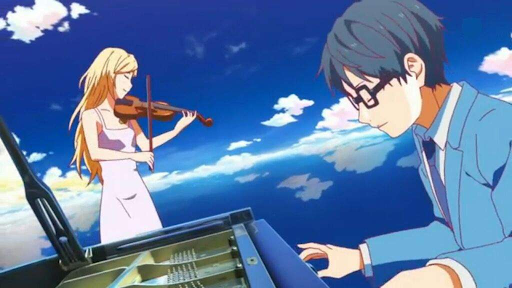 Your lie in April is a musical rom/com anime with lots of drama that premiered on October 10, 2014, by Japanese anime studio A-1. The anime consists of 22 episodes and an OVA. The Anime revolves around Arima Kousei, a 14-year-old boy who was obsessed with piano. Arima was a renowned pianist who was also known as the child prodigy of the piano and the human piano when he was just a child after winning a National Piano competition.

After an argument with his sick mother, Arima began to downgrade as a pianist and stopped hearing the sounds of the notes he played and suddenly stopped playing the piano until he met Miyazono Kaori. The anime truly showed a clash of love as Kaori was the girlfriend of Arima’s best friend Watari Ryota. After meeting Kaori, the change in Arima’s expressions and his music is very heartwarming and wholesome to watch. Looking back at the show, the small arguments between them, the inconsistency in their relationship, and the music that they created together were very exciting and very sad at the same time.

Arima’s mother abused him every time he missed a note whereas Kaori asked him to be free when playing music and try to express his feelings rather than following the notes exactly. This shows the different perspectives of musicians, one trying to achieve perfection and the other trying to express their feelings through music.

Your lie in April portrays the true meaning of music and shows how your music sparkles when you want to express your feelings through music. The ups and downs in Arima’s story truly show the essence of life. As Arima was playing for the final time in the series, he sees Kaori’s silhouette playing the violin with him which I believe is what he wanted to express, his love for Kaori and his sorrow for losing her. I was anxious when Kaori announced that she was going to die. In the final episode I was anticipating for Kaori to survive miraculously but the anime showed how reality works. Even after Kaori’s death, we can see how Kaori changed Arima’s life completely. Kaori left a final letter to Arima before dying which made the fans shed tears of sorrow. It was not a joyful ending but was realistic and had a great impact on the audience.