Book Review: A Walk to Remember by Nicholas Sparks 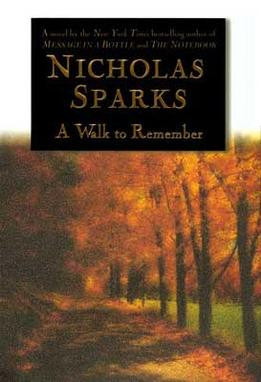 Many of you have certainly heard of Nicholas Sparks' books, which are tearjerkers designed to make the reader fall in love with the story only to cry at the end. The lovely romance wand of Nicholas Sparks is once again waved over the subject of changing first loves. A Walk to Remember was the first Nicholas Sparks novel I read, and it was basically flawless. In the late 1950s, Landon Carter was a senior at Beaufort High School in Beaufort, North Carolina, when he first encountered the power of love.

This book is a twisted take on the classic romantic story. Rather than the good girl falling in love with the evil lad, it's the other way around. Jamie Sullivan is a shy girl who usually carries a Bible with her school materials. Landon Carter, your normal high school ruffian, is not the kind of boy you'd expect to like her. Nonetheless, fate has a way of bringing individuals together who are secretly meant for each other.

The fact that it was written from Landon's perspective was appealing to me. I've only read a handful of romantic novels written from the viewpoint of a man, let alone someone like Landon. Despite this, Sparks' use of the first-person narrative to portray Landon allows the reader to grasp how he truly feels as opposed to how he acts outwardly.

Landon narrates his story in flashback, forty years later, as if he lived it only yesterday. He remembered himself at the beginning as a rather pampered privileged young kid who appeared to dissolve his life. In the end, he becomes more compassionate, more loyal, and more sensitive. He credits it all to Jamie, but he also attributes it to the fact that he is essentially a good young man who just needed to find his way. Landon's character grows and develops throughout the novel, and by the end, he's the perfect gentleman. Jamie is the story's true angel, not just a character in the school play. She is portrayed as a quirky young girl who wears her long hair in a bun and usually always wears the same sweater and plaid skirt almost every day. Her friends had teased her since they were children because of her odd conduct and the bizarre behavior of her Baptist minister father, Hegbert Sullivan. But underneath her strange way of life, Jamie is a very good, compassionate young lady. She takes care of her father, looks out for the welfare of the local orphans, and she irreversibly affects Landon's life. She is the type of person you'd want as a best friend. There are no two people in a novel that I have ever wanted more to end up together.

The allure of Nicholas Sparks' lovely novel A Walk to Remember lies in its simplicity and purity: the quiet setting, the simple plot, the everyday characters, and the beautiful and breathtaking, yet uncomplicated love story that will make you believe in the most wonderful of fairy tales, free of the encumbrances of ladies trapped in high towers, charming princes on white horses. There will be no madness! Nicholas Sparks' A Walk to Remember is one of the most beautiful, innocent, pure, and wholesome love stories ever written, and it truly deserves to be remembered.